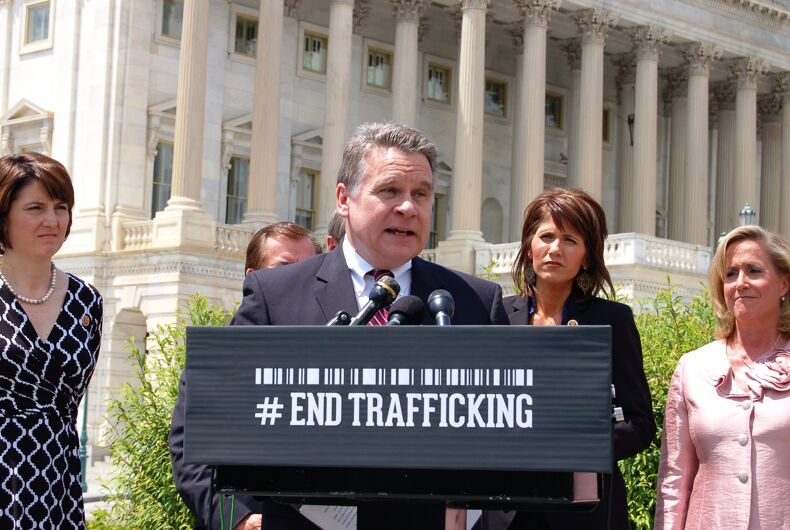 A GOP lawmaker is in hot water after his comments regarding same-sex parent adoption went viral. After all, it was all caught on tape.

During a scheduled appearance at Colts Neck High School on May 29, 2018, Republican Representative from New Jersey Chris Smith suggested that children “would be better off in orphanages” than with LGBTQ families.

The tape was only recently obtained and made public. The Washington Blade reported the contents this morning.

Smith seemed tongue-tied when asked for his opinion on the matter.

Student Hannah Valdes, a senior at Colts Neck High School, explained to Smith that her gay sister wants to adopt a child with her partner and asked for his thoughts.

Specifically, she wanted to know “based on household studies” whether or not she would be considered “less of a legitimate parent” than someone in a different-sex relationship.

Smith appeared to reference the U.S. Supreme Court’s 2015 ruling for marriage equality in his response.

“The issue, legally, is moot at this point especially with the Supreme Court decision,” he said.

He then added that her sister is “free to adopt” a child.

Valdes pushed back and it was at that point that Smith couldn’t quite find his words.

It kept going downhill from there with Smith saying that orphanages might be a “possibility” for some children.

“Somebody mentioned orphanages before,” Smith said. “I mean, orphanages are still a possibility for some kids.”

One student is heard uttering, “You’d rather have kids in an orphanage than with-”

Valdes told the Blade that the exchanges didn’t end there, but it was not heard on the tape. She said that earlier in the assembly, another student asked about one of Smith’s votes in 1999 in favor of an amendment that would have banned adoption by gay parents in D.C.

Valdes said Smith claimed he would still vote in support of banning same-sex adoption and that his views haven’t changed since 1999.

According to Valdes, Smith exhibited “prejudice and homophobic views” that “were offensive,” and the entire student body of Colts Neck High School was “in shock that someone had come to our school with these opinions.”

The campaign fights these “license to discriminate” bills on the state and federal level and builds support for the Every Child Deserves a Family Act, a federal bill prohibiting child welfare agencies that receive taxpayer funds from discriminating against LGBTQ youth or prospective foster and adoptive parents.

This student needs 6 credits to graduate, but his school won’t let him because he’s gay