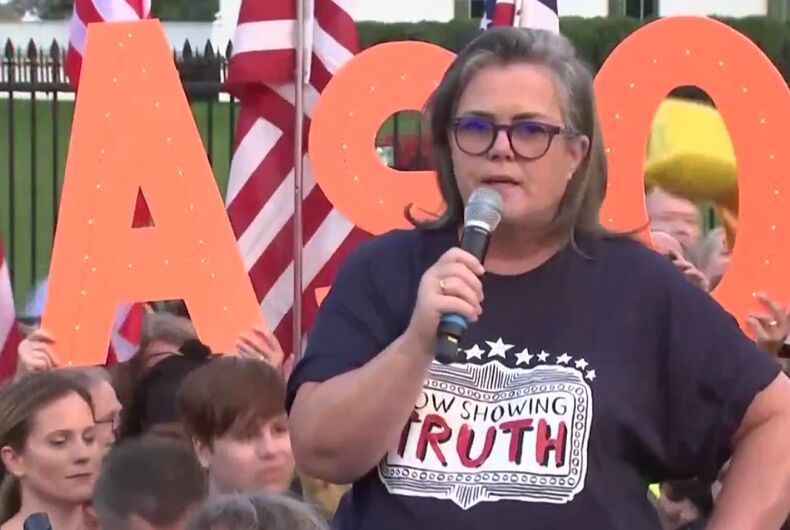 Rosie O’Donnell and a group of Broadway performers went down to Washington, D.C., to protest Donald Trump.

The protest is part of #KremlinAnnex, a series of daily protests outside the White House that started on July 16. The hashtag #KremlinAnnex is a reference to Russian interference in the 2016 presidential election in favor of Trump.

Standing in front of giant letter that spelled out “TREASON,” O’Donnell and the Broadway performers marked the 22nd day of continuous protest outside the White House.

“The message to the people is to use your voice, stand up against treason and stop fascism before it takes over the United States,” O’Donnell said.

She also talked about the importance of protest. “We’re gonna keep coming until he’s out. We hope to give you a nice little show, and remind you your voice is important. Let the president know we’re alive, awake and woke,” she said.

Rosie O'Donnell led Broadway stars in a sing-a-long protest using songs from "The Wiz" and "The Sound of Music" outside the White House. It's the 22nd consecutive night of #KremlinAnnex protests there since the Trump-Putin summit in July. pic.twitter.com/Dxx06DcC19

The performers then started in on a rendition of “America the Beautiful.”

The protest featured Broadway songs, chants, and speeches from people like Kristin Mink, who was in a viral video a month ago when she confronted EPA director Scott Pruitt in a restaurant and told him to resign.

“I think it’s time for a brand new day,” said Mink. “The Republicans, they want to win the elections by making fewer people vote. Democrats, we win elections by getting everyone to the polls.”

We’re in Washington, DC, where Rosie O’Donnell and others, including Broadway cast members, are protesting outside the White House

Instead of CNN covering trump rallies they should be covering this!!! @CNN we want to see this live!!! Not trump’s rally

A true rock star for helping to lead this effort, @Rosie! Thank you (!!) to everyone making this trip!! Can’t wait for you to join us at the #KremlinAnnex!! pic.twitter.com/ZNBPHlgruY

These small town firefighters will leave you hot & bothered