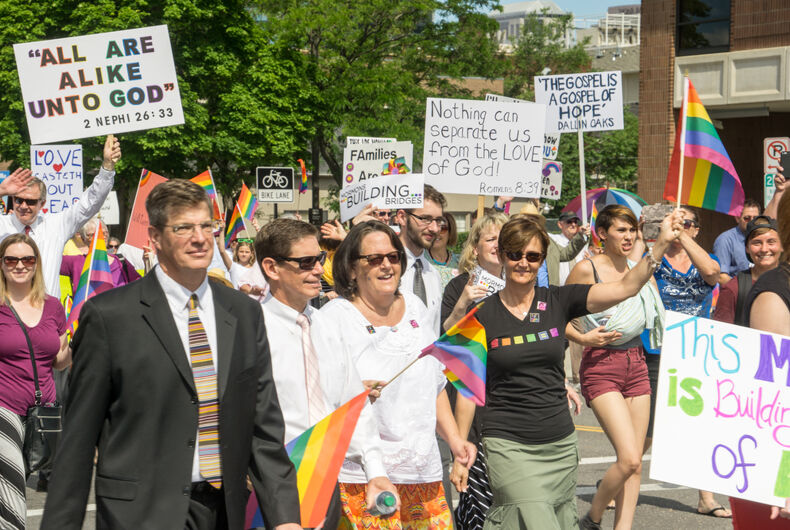 A non-binary student at Brigham Young University (BYU) could get kicked out of the college if they get top surgery.

Kris Irvin has been taking classes on and off at BYU in Provo, Utah, since 2004.

After years of severe gender dysphoria, they decided to get top surgery to remove their breasts. Irvin has a history of cutting themselves – particularly their breasts and wrists – because of the dissonance between their gender identity and their physical body.

Irvin, a devout Mormon, wants to stay in the Church of Jesus Christ of Latter Day Saints (LDS Church), which, as a rule, is not accepting of LGBTQ people.

The LDS Church’s The Family: A Proclamation to the World says, “Gender is an essential characteristic of individual premortal, mortal, and eternal identity and purpose.” Its handbook for local lay leaders says that a “transsexual operation” is grounds for formal discipline.

Irvin believed that top surgery would be a compromise. “Transsexual operation” in the handbook is generally understood to mean bottom surgery, and they would not go by male pronouns. Their marriage to Nate, a cisgender man, wouldn’t become a same-sex marriage, which is also banned within the LDS Church.

The problem started when Irvin created a GoFundMe page to raise money for the surgery, which their local bishop found. He met with them and then they exchanged letters.

“At what point do my breasts determine my level of membership in the church?” Irvin wrote to the bishop in a letter. The LDS Church does not engage in disciplinary action against cis women who get breast enhancement surgery.

Disciplinary action can range from restricted participation in the church to full excommunication. The local bishop has a lot of latitude to decide what is appropriate.

But one thing that the bishop could do is withdraw his endorsement that Irvin is “living by church standards,” which means that they “must discontinue enrollment” at BYU. The university, owned by the LDS Church, requires students to show each year that they are in good standing.

Irvin, who has a child, is about 30 credits away from graduating, and they probably won’t finish by next spring, when the top surgery is scheduled. Which means they have to choose between relief from gender dysphoria and finishing college.

“I’m really close. I’m looking into transferring or trying to finish up as quickly as possible,” Irvin said.

Bishop King disagrees with that assessment, and told Irvin in a letter to consider education to be one of “the blessings you have in part or entirely because of the gospel.”

“If I ran my own church school, I probably wouldn’t make it dependent on breast size,” Irvin said.

A spokesperson for BYU said that there is no school policy on transgender students. If a bishop withdraws an endorsement, they said, then the school won’t even know why that happened.

“If an ecclesiastical leader declines to endorse a student, they do not share the reason for doing so with the university unless a student gives consent.”

BYU has a religious exemption from Title IX, meaning that it can receive federal money but still discriminate on the basis of sex.

Irvin, for their part, believes that they haven’t violated any LDS rule anyway.

“If they’re not going to recognize me as male anyway, what’s the problem?” they asked.