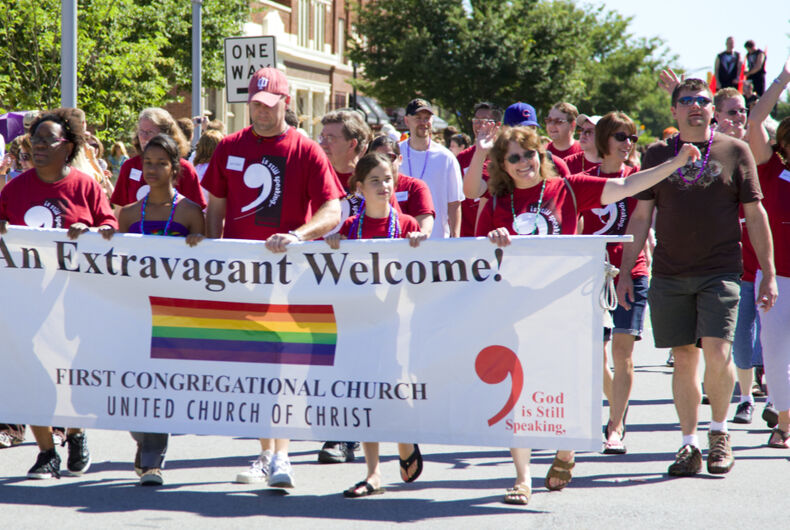 Eastern Kentucky’s WYMT television station is not The Onion, but you’d be forgiven for the mistake.

The station’s news director is apologizing after the outlet was tricked into publishing a fake news story about a gay church that was supposedly coming to the small town of Coal Run Village. The worship center would be taking over the Magic Mart retail location at a local strip mall according to a press release sent to the station.

The fake news release from “Rainbow Flock Ministry” and “Pastor Clark” fooled an unnamed staffer – despite some wild claims about the “church” ministry. The announcement said “the facility will have a dance floor with laser light show capabilities, reclining leather pews, rechargeable eHymnals, and a cedar meditation sauna.”

“We think that if Jesus had the opportunity to turn an old Magic Mart into a church for Appalachia’ LGBTQ+ community he’d jump out of his sandals at the opportunity, so we’re going to do just that,” Rainbow Flock pastor/founder Clark Boyd was quoted as saying in the release. “The folks here deserve it. We can’t wait to make Pikeville proud.”

And the station bought the story – stereotypes included – hook, line, and sinker.

“Our team failed to meet the standards of journalism we set here at WYMT. They did not attempt to contact anyone who owns the building or the mayor of Coal Run,” WYMT Assistant News Director Kyle Collier added as a correction to the original story.

“Our journalist simply posted a release we were sent via Facebook and e-mail. It is inexcusable and we apologize to all of you who rely on WYMT as your source for local news.”

The station’s viewers and fans on social media, were not amused – and many resorted to attempts to use the Bible to justify their prejudice. Some of the responses rank right up there with the fake release for sheer stupidity.

“Solomon and Gomorrah got destroyed with Brimstone and fire!, So what makes people think that it’s okay with him now?” Kim Campbell wrote on station’s Facebook page. “No followers of this kind of stupidity is gonna enter into Heaven!, believers!! is not supposed to socialize with nor be around unbelievers or Abominations if the word can’t change them no Man nor Woman is either!”

Sodom and Gomorrah were the cities destroyed in the Bible. Solomon was King of Israel.

Viewer John Harper was onto the hoax, but never quite put it together. “Really??? I’m not a religious person but I do know a little,” he wrote. “God clearly says this is wrong and from the description of the “church” the only thing missing is the drugs and alcohol.”

Caitlin Cummings was still fooled, but took a much more pragmatic approach. “All you all saying it sounds like a club, I’ve been to some old baptist and penicostal [sic] churches and ya’ll get down. They’re just trying to get down with Jesus.”

But Elizabeth Ann wins the prize for not only pointing out the story is fake, but also taking the local yokels to task for their hypocracy and homophobia.

“And…wymt is officially the onion. you’d need sunday to be everyday for most of y’all to have enough time to be forgiven for all your hateful and homophobic nonsense. this article isn’t real, but unfortunately the words coming out of your mouths are.”

This trans college student might be expelled if they have surgery