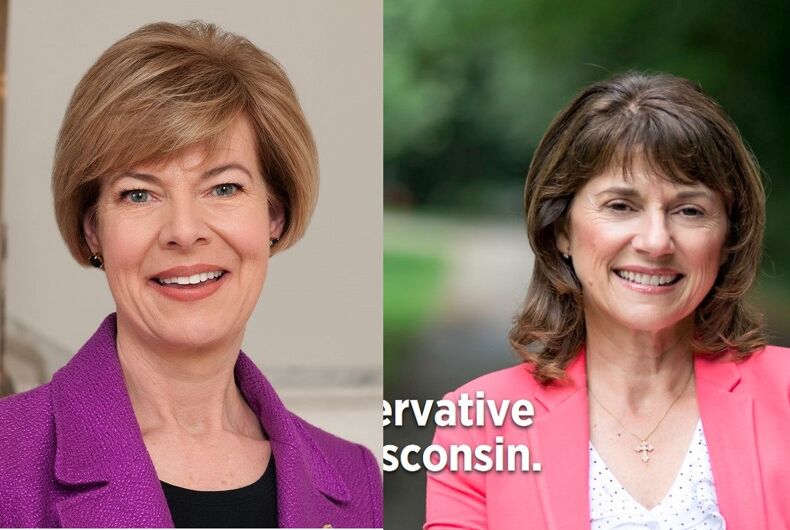 Leading her opponent Kevin Nicholson 54-40, the Associated Press called the primary for Vukmir.

Vukmir, who is staunchly opposed to LGBTQ equality, will face Senator Tammy Baldwin, the first lesbian in the U.S. Senate, this November in the general election.

Vukmir has been in the state legislature since 2002. She opposes marriage equality and, in 2010, went so far as to vote again anti-bullying legislation.

While she has not yet brought up Baldwin’s sexual orientation in an attack, she has already accused the Senator of being “prejudiced” against Christians.

Baldwin opposed Gordon Giampietro’s nomination to a federal judgeship, in part because of his vocal opposition to marriage equality. Vukmir said that this is an example of anti-Christian discrimination, because if you don’t like it when Christians get into positions of power and use that power to make your life worse, then you clearly just hate Christians.

Discrimination and religious persecution are never acceptable, and it is despicable that @SenatorBaldwin can freely and openly engage in this prejudiced behavior against a Christian. #wisen https://t.co/DmVYv8Bprv

“Wisconsin voters will have a stark choice come November – reelect Senator Tammy Baldwin, the first openly LGBTQ U.S. Senator, or elect an extremist anti-LGBTQ politician who prides herself on the divisiveness that makes Congress so unpopular,” said Annise Parker of the LGBTQ Victory Fund.

Vukmir may have previewed her general election strategy against Baldwin when she accused the Senator of being on “Team Terrorists” instead of “Team America.”

Like many Democrats, Baldwin opposed Gina Haspel’s nomination as director of the CIA because of her role in the George W. Bush torture regime. Vukmir said that this is evidence that Baldwin wants to give terrorists “hugs and safe spaces” and doesn’t want to “ensure Americans are kept safe.”