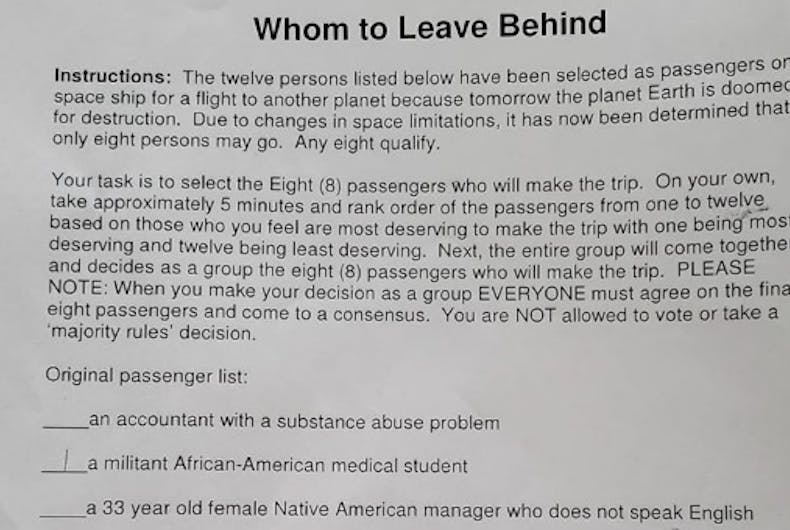 A seventh grade assignment that asks students to rate different kinds of people has stirred controversy in an Ohio town.

The assignment, entitled “Whom to leave behind,” presented students at Roberts Middle School in Cuyahoga Falls, Ohio, with a scenario: Earth is about to be destroyed, and you can only save eight out of twelve people. Students were told to rank them individually, and then come up with a group consensus on which people should be saved.

The people were described as:

The assignment was taken from the University of Houston’s “Diversity Activities Resource Guide,” where it is included as an “icebreaker” exercise.

While the resource guide does not provide any information that contextualizes the activity, the website says, “It is strongly encouraged that the facilitator of the activities below has a background or expertise in facilitating exercises that may be culturally sensitive.”

The assignment got the attention of Councilmember Adam Miller, who posted it to Facebook.

The assignment is “implanting prejudicial thoughts in these young impressionable minds,” Miller wrote. “This is NOT building a – ‘culture of caring’ – this is building a culture of animosity, antagonism & hostility!”

I spoke with the teacher and I certainly can appreciate the fact that he wants to promote diversity etc. It was a…

According to the 2010 Census, Cuyahoga Falls is 93.4% white, and most of the comments on Miller’s post are white parents who think the assignment is age-inappropriate.

“The intent of this lesson was to engage in an activity in diversity designed to promote tolerance and break down stereotypes,” Superintendant Todd Nichols said in a statement posted to the Cuyahoga Falls School District website.

“Unfortunately, some parents were upset and concerned by this particular assignment and thought it was not age-appropriate.”