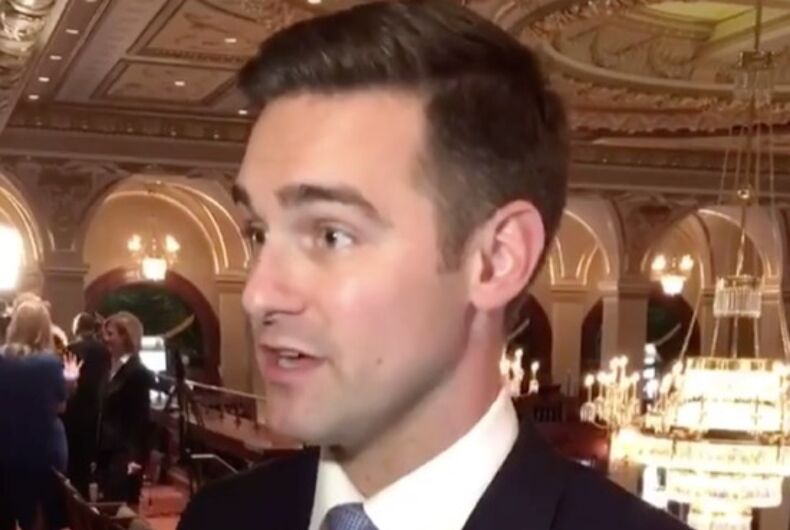 Republican Illinois state representative Nick Sauer has been accused of using nude photos of his ex-girlfriend to con straight men into having cybersex with him. The men thought they were sexting with the woman in the photos.

Sauer is expected to resign by the end of the day.

“The allegations that have come forth against Representative Nick Sauer are troubling. He will be resigning from office today. We should allow the proper authorities to conduct their investigations,” said state House Republican Leader Jim Durkin in a statement.

“He should resign,” GOP Governor Bruce Rauner told Politico. “And my understanding is that he’s going to resign and that’s the right thing for him to do.”

According to a complaint filed by ex-girlfriend Kate Kelly with the Office of the Legislative Inspector General, Sauer created a fake Instagram account “to catfish other men using my privately shared naked photos. Nick would use this account to direct message men with my photos to engage in graphic conversations of a sexual nature. The men believed they were communicating with me and Nick shared private details of my life.”

Kelly claims Sauer admitted to her that he was behind the fake account and begged her to “let it go.”

The two had a long-distance relationship and frequently exchanged intimate photos. But when Kelly moved to Chicago from California they quickly broke up when she realized he was also seeing other women.

According to the complaint, a man she didn’t know contacted her on her personal Instagram account to say “he had been communicating for 4 months with someone pretending” to be her.

“He came to my house & confessed to catfishing men with my photos for 2 years to at least 8 men. He was unable to provide the names and begged that I let it go,” she wrote in the complaint.

No charges have been filed against Sauer yet, but the Chicago Police Department is also investigating.