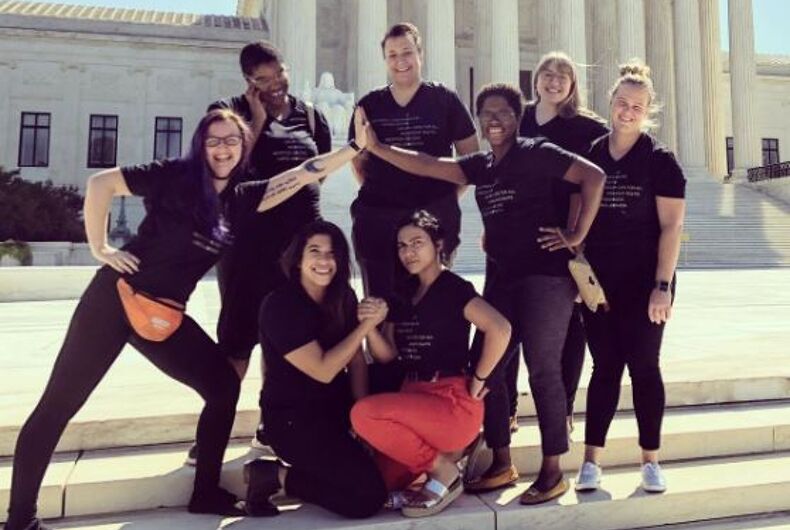 This Women's Equality Day 2018, let's take a look at the women who inspire us all to be better human beings for one another - and ourselves.Photo: Twitter

The U.S. Congress designated August 26 as “Women’s Equality Day” in 1973 as a way to commemorate the 1920 certification of the 19th Amendment to the Constitution, granting women the right to vote.

It was the culmination of a massive, peaceful civil rights movement by women that had its formal beginnings in 1848 at the world’s first women’s rights convention, in Seneca Falls, New York.

The observance of Women’s Equality Day not only commemorates the passage of the 19th Amendment, but also calls attention to women’s continuing efforts toward full equality. Workplaces, libraries, organizations, and public facilities now participate with Women’s Equality Day programs, displays, video showings, or other activities.

Plea bargains, indictments, hush money, and daily protests at the White House have no power over these inspiring LGBTQ women. This Women’s Equality Day 2018, let’s take a look at the women who inspire us all to be better human beings for one another – and ourselves.

“We must carry forward the work of the women who came before us and ensure our daughters have no limits on their dreams, no obstacles to their achievements, and no remaining ceilings to shatter” Obama #leadfromeverychair #WomensEqualityDay @WLNtmobile pic.twitter.com/sRVdyYby6W

To all of my sisters who inspire and lift me up daily – I celebrate this #WomensEqualityDay day with you and commit to continue to push for equal opportunity for all! #Leadfromeverychair @WLNtmobile pic.twitter.com/G2chRNCyQH

As we celebrate #WomensEqualityDay, let us remember that the struggle for women's right to vote did not end with the 19th Amendment. #Women of color were largely excluded from mainstream suffragette movements. As we #PressForProgress, #intersectionality is key. #Equality

When looking for a seat at the political table, the most important thing any woman can do is to register to vote and, just maybe, decide to run for public office herself.

Get out the vote! There are an unprecedented amount of women running for office this year, many of whom would be the first woman, LGBTQ person, or woman of color elected to a particular seat. Check out this list to see who you can vote for! https://t.co/LRvarpw759

We fight to #StopKavanaugh because the SCOTUS balance would turn against the rights of women, people of color, young people, immigrants, workers, and LGBTQ people if he is confirmed. #ReproductiveJustice pic.twitter.com/CWiZDkMwIM

“If they don’t bring you a seat at the table, bring a folding chair” one tweet proclaimed.

#WomensEqualityDay commemorates the 19th amendment, but the fight for women’s equality is about much more than voting rights. I'm committed to winning equality for ALL women & making sure immigrants, women of color, & LGBTQ women have a seat at the table. RT if you're with me! pic.twitter.com/JAXBUcdDcd

In celebration of #WomensEqualityDay – 8/26. For many African American women exercising our right to freely vote did not come until the 1960s however, today we stand in solidarity recognizing the past and the bright future for ALL women! #LeadFromEveryChair pic.twitter.com/6ZTkjWICdS

Reptile research is something everyone can participate in! Download the Ontario Reptile Amphibian Atlas App in the GooglePlay or App store to start reporting your reptile & amphib sightings! @OntarioNature #WomensEqualityDay #CitizenScience #Research https://t.co/TrQTYOdgGy pic.twitter.com/ftZeDBCZQ7

#WomensEqualityDay is about marking the anniversary of women’s right to vote in this country + our achievements since then, encouraging every woman to go after what matters most to her, & (let's be honest) acknowledging the barriers & biases that still exist. #LeadFromEveryChair pic.twitter.com/JGkP9xDMrz

Is the LGBTQ community really taking away adoption rights from Christians?