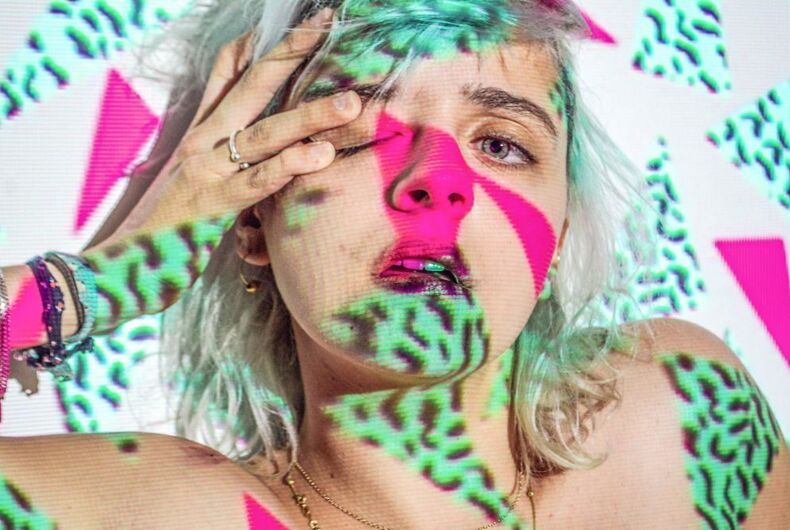 As a non-binary actor, I rarely walk into an audition thinking that I will be seen as anything other than my assigned gender. Getting parts is hard enough without further “othering” myself; plus not knowing if I’ll see these people again, I don’t always have the emotional energy to go through explaining what I mean when I say “I use they/them pronouns.”

We have made progress, but we’re just beginning to scratch the surface of widespread understanding. Seeing gender as a binary is at the core of the vast majority of peoples’ beliefs and those of us on the vanguard are challenged daily on our very existence.

And let’s be clear – stating what pronouns you use is one thing, being sure that people understand that that short phrase means “I am not a woman” or “I am not a man” (and all the beautiful personal messy nuances within that) is another. And now I find myself in the role of Romeo in a soon to premiere play Romeo/Juliet, where both characters are portrayed as female. Groundbreaking as that is, it still puts me in a challenging position as an actor and a person.

The very first rehearsal I had with Sharone Halevy, director of Romeo/Juliet, our conversation turned to the topic of what Romeo’s gender identity was. The playwrights, Matt Minnicino and Hailey Bachrach, had originally intended for both Romeo and Juliet to be cisgender lesbian women.

Sharone, aware of my own gender identity, wanted to have an intentional conversation about Romeo’s gender, not only her sexuality. After much thought, I decided Romeo would be cisgender, and now that I’m writing about it, I’ve hit a few obstacles as to exactly why.

The best answer I could find to why is unfortunately one that doesn’t make me a very good artist. It was just easier. I struggle to define my non-binary identity and I may never (nor do I think I have to).

Being non-binary comes in so many different forms that I don’t know that I would be able to create a Romeo that was non-binary in a different way than I am. Separating myself, Jules, from Romeo in that way meant that my personal internal struggles with gender are safe for the moment. I also know that my own experiences of gender inevitably come through in my interpretation of Romeo.

Romeo is a young romantic queer much like I was at age 16, completely unsure of how to explain how I felt until I found the word “queer” and found other queers to be queer with. Romeo is an out and confident lesbian and I love playing the naiveté of her youth along with that confidence in her sexuality: at her age, I was one of the only queer people in my community and I definitely would not have “wooed” a person quite like Romeo does with Juliet.

I can’t speak generally, but there’s something to be said in a young teenager having the courage to woo, to have crushes and to flirt even if it’s with a Death Cab for Cutie song. I grew up only seeing that in a heterosexual context.

The closest I got to that kind of courage was when a boy in high school asked why I didn’t ever make out with anybody and he mockingly said, “What are you gay?” only to have me blurt out “yeah, probably.”

With Romeo, I get to own that pride and youth, that sloppy sappy love and that beautiful teenage gayness.

It’s hard writing about my gender and I think that it’s okay for me to say that I’m just not completely ready to give that part of myself to my art form. I don’t even feel okay giving that part of myself to most of society. I was lucky enough to have a loving supportive partner who embraced calling me a boy and friends that pulled the whole “yeah we already kind of knew Jules” in a way that felt like I could take my own time figuring things out.

I love being able to say, “Wow, this is so foreign to me. Is this how cisgender people live?” It’s the same way that big shot Hollywood actors who are cis get asked how they could have ever possibly done the work to play a trans character (here’s a clue: don’t do it, give the role to a trans person, are you even auditioning trans people to play cis characters?).

I am proud that this production has hired queer actors to play queer roles, an issue much debated recently, most notably with Scarlett Johansson removing herself from the film Rub & Tug where she would have played a transman.

I am non-binary, but I am often perceived as a girl and I am white and both of those things make me exponentially safer in the outside world: being misgendered, often, protects me. It’s not just a question of kids having people to look up to, but representation can literally save lives.

Only 16% of Americans know an out trans person and trans women of color have a life expectancy of 35 years old. Violence, homelessness and discrimination are rampant.

We need more non-binary and trans narratives so that the multitudes of nuances within those identities can be appreciated and celebrated and remembered. There are so many different ways to be trans and gender non-conforming.

So in short, I think my Romeo is non-binary, but just doesn’t know it yet. Unfortunately, she doesn’t live long enough to figure it out (oops…..spoiler). But come see the show even if you do know the ending. It’s the rest of the story that will open your eyes and hopefully make many see themselves on stage.

For tickets and more information please go to: romeoslashjuliet.brownpapertickets.com.

Juliette Alice studied acting at Middlebury College and was classically trained at The British American Drama Academy. They have most recently appeared in a one-person production of 4.48 Psychosis by Sarah Kane and the short film Honey Brown Eyes. They are part of the Paper Doll Ensemble in Philadelphia where they have devised shows such as This Is How Girls Die. A native French speaker, they look forward to one day performing in French.

Can Dems reach the movable middle to overturn America’s Bully-in-Chief?