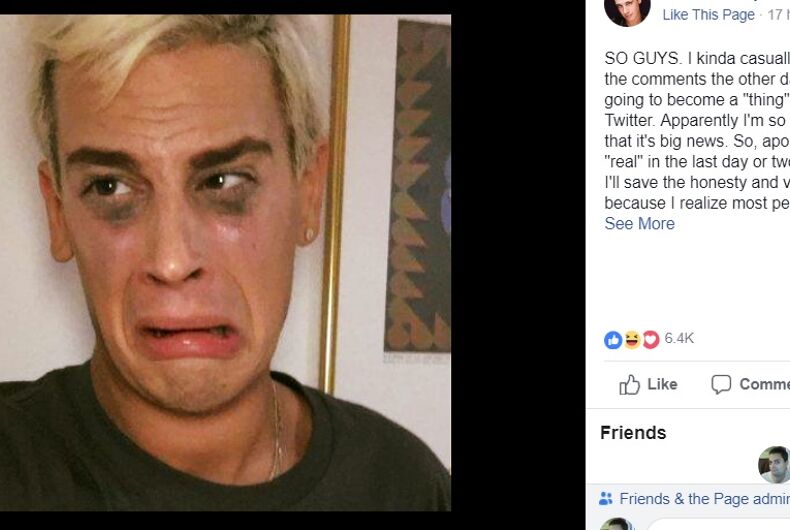 White supremacist Milo Yiannopoulos exploded on Facebook this weekend because one of his fans asked him to do his job.

Sometimes Milo brags about his outlandishly expensive lifestyle on Facebook.

Last week, he made a couple of these posts.

A fan named Karen Taylor saw the above post of Milo eating a live crab and asked a rather innocent question: “Guessing this lifestyle is why you’re not doing your promised podcasts and losing subscribers. Where did our old Milo go?”

Being asked to do the work that people paid him for, though, was too big of an insult. Milo put the rabble in their place with a rant. (Paragraph breaks added to make it easier to read.)

Over the past three years, I have spent literally millions of dollars trying to do talks, speeches, events, rallies and protests, to say nothing of all the stuff I do behind the scenes I can never tell you about. A lot of that money was my own wealth, from before I even started in journalism.

My events almost never happen. It’s protests, or sabotage from Republican competitors or social media outcries. Every time, it costs me tens or hundreds of thousands of dollars. And when I get dumped from conferences, BARELY ANYONE makes a sound about it — not my fellow conservative media figures and not even, in many cases, you guys. When was the last time any of you protested in the street at the treatment meted out to me or Pamela Gellar or Mike Cernovich or Alex Jones?

I have repeatedly put myself in harm’s way in service of American values. My annual security bill amounts to hundreds of thousands of dollars — just so my husband and I don’t get killed going for sushi. I have to make that money somehow just to stay afloat, and that doesn’t scratch the surface of staff costs, insurance, your insane American taxes.

I’ve fought bitterly and endlessly for freedom in a country I don’t even belong to — not for my benefit, but for yours. I have been betrayed and abandoned by everyone who ever called themselves my friend, with a small handful of notable exceptions.

I was a significant factor in Donald Trump getting elected, for which I have received zero credit. I almost single-handedly ignited the current debate about free speech on campus and NO ONE has ever matched my ability to draw attention to these issues.

For my trouble, I have lost everything standing up for the truth in America, spent all my savings, destroyed all my friendships, and ruined my whole life. At some point, you realize it’s occasionally better to spend the money on crabs and cocktails.

If anyone has a problem with that, then frankly they can go fuck themselves. All I ever read here is criticism and ingratitude. You guys have no idea what I have sacrificed for you, and you think just because I drown my sorrows with a few expensive bottles of wine, you’re justified in calling me lazy and self-involved.

I don’t advertise my selflessness, because I’m not a victim. But for the love of God show some recognition of what your front-line warriors have accomplished on your behalf, you entitled fucking babies. YOU WILL KEEP LOSING until you support those of us out there on the front lines while you tweet and Facebook from your living rooms

In the rant, he claimed that he’s paying “tens or hundreds of thousands of dollars” each time he has an event, although he did not explain why he keeps hosting events if he’s losing money on them, or why he’s spending almost $8000 on a night out if he has “spent all my savings.”

Also, his comment about “insane American taxes” is bizarre – the U.S.’s overall tax rate is about a third less than his native U.K.’s, and it’s smaller than most developed countries’ tax rates.

Yesterday, Milo took to Facebook to say that he’s just a normal human being who eats live crabs and explodes in anger whenever anyone tells him to do his job.

SO GUYS. I kinda casually snapped at someone in the comments the other day. Didn't realize it was going to become a "…

If Trump wants to ‘protect our kids,’ why isn’t he banning priests instead of migrants?