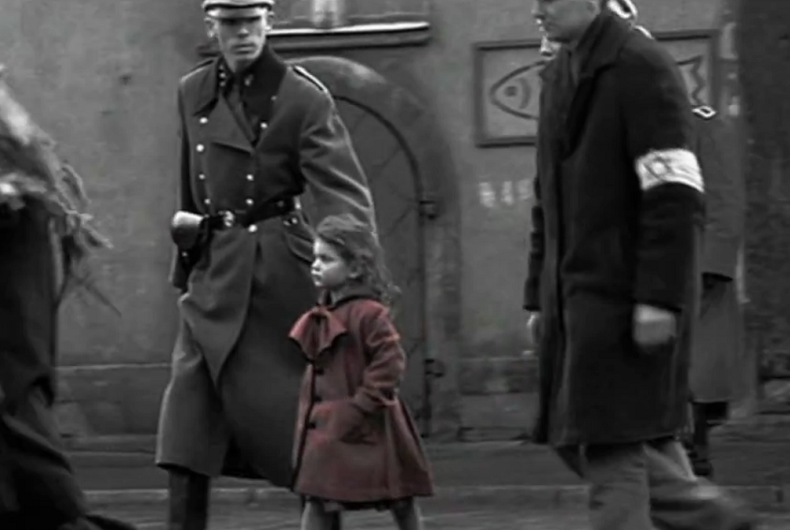 The girl in a red coat from "Schindler's List"Photo: Movie still

Rarely in my life have I been aware of being in the presence of greatness. It was clear to me as I shared breakfast with Justice Gabriel and Ruth Bach seven years ago that this was indeed one of those times.

As we sat at a circular booth in their hotel dining room in downtown Omaha, Nebraska, with potted plants stationed beside a buffet bar filled with delicacies. Gabriel and Ruth shared with us the pride and the pain of their lives escaping the Holocaust, traveling the world, raising three children, and losing their eldest son to cancer.

I cannot recall an occasion in my life where I have witnessed a greater sense of wisdom, brilliance, and grace than I did seated beside these two remarkable people.

One month earlier, Beth Seldin Dotan had invited me to present the keynote address at a day-long workshop at Wayne State College sponsored by the Institute for Holocaust Education. The workshop focused on ways to incorporate Holocaust studies into the curriculum for Nebraska college and university pre-service teacher education students.

Beth asked me to tell my family’s story in the Holocaust, which I agreed to do. She also asked if I would like to stay an additional day to join her in escorting them to various events they were invited to address during their short stay.

Justice Bach acted as a lead prosecutor at the Adolf Eichmann trial over a half century ago in Israel and he served as a Justice in Israel’s Supreme Court. Beth’s obvious enthusiasm and interest in meeting this couple was contagious, and I immediately accepted her gracious invitation.

Following our breakfast where we got to know one another and where the couple shared some very intimate details of their extraordinary lives, Beth and I escorted the Bachs to another site where Justice Bach was to give an address to members of the Nebraska Bar Association.

Justice Bach began by talking about his early life. He was born in Germany in 1927. He attended the Theodor Herzl School in Berlin. He told us about a premonition his father had in 1938, which led to the family leaving Germany for Holland when he was 11 years old.

Following another of his father’s premonitions, the family fled Holland just one month before Germany’s invasion of that country.

The Bachs set sail for Palestine on the ship Patria, its last successful trip before the Germans sank it. Justice Bach later learned that he was the only Jewish survivor from the Herzl school.

Bach may best be known to the world community for his tireless work as a lead prosecutor in the trial of the Nazi SS Lieutenant-Colonel Adolf Eichmann. Eichmann was ultimately responsible for the murder of approximately four million Jews in the death camps and another two million by mobile extermination units.

Following the end of the war, allied soldiers captured Eichmann. However, since his name was not then widely known, he was able to escape from an American internment camp in 1946 and eventually flee to Argentina.

Israeli intelligence agents captured him in 1960 living under an assumed name in a suburb of Buenos Aires and, nine days later, secretly abducted him to Israel to face a public trial in Jerusalem.

The Israeli court charged Eichmann with 15 criminal counts including crimes against humanity and crimes against the Jewish people. On December 15, 1961, the court sentenced him to death and he was hanged on May 31, 1962.

In his introduction of Justice Bach, the moderator showed a video segment from the trial showing an exchange between prosecutor Bach and a Hungarian woman, a victim of Eichmann’s ruthless persecution of the Jews. Bach talked then about the most emotional moment for him at the historic trial.

He recalled the testimony of a survivor whose family perished at a concentration camp. At the trial, Bach asked this man to recount his experiences.

“The man told me,” said Bach, “’When we arrived at the camp, Nazi soldiers ordered us into a single-file line. They then sorted us into two lines. I later learned that the people they sent to the right, soldiers marched directly into the gas chambers. Those on the left, they packed into the barracks destined for the work units’.”

“’I can clearly to this day remember the sounds and images. For my dear wife, they shouted, “To the right,” and my little two-and-a-half year old daughter, “To the right.” My young son asked the guard, “Where should I go?,” and the guard answered, “Okay, young man. You can go to the right with your sister and mother.” The guard asked me what was my profession, and I said I was an engineer. He demanded that I go to the left’.”

“’I watched my wife and my son fade into the distance and then swallowed up by the crowd, and the last image I can remember was seeing this tiny but bright red coat, the coat I bought my daughter, grow smaller and smaller into a mere dot and eventually evaporate into the distance. This is how my family disappeared from my life’.”

Upon hearing this at the trial, Bach could no longer speak, a lump gathering in his throat. Following an uncomfortable silence, the judge demanded Bach to continue questioning the witness.

To regain his composure, Bach began fiddling with his papers, but he could not find his voice for some time. Passing through his mind he fixed on his own two-and-a-half year old daughter, the daughter he had only recently given the gift of a bright red coat.

“From that time forward, I can be attending a sports event. I can be dining at a restaurant. I can be sitting outside, and suddenly I hear my heart beating loudly. And then I turn around, and I see a little girl or a little boy wearing a red coat.”

Steven Spielberg heard about this incident from the trial, and contacted Justice Bach for the details. He later incorporated this event into his film Schindler’s List, a movie filmed virtually in black and white – except for a scene where Schindler peers into a concentration camp and among the grittiness, the pain, and the sickness, sees a young girl wearing a bright red coat.

Sometime later in the film, he chances upon the coat again, though this time it is torn and filthy and the girl is nowhere to be seen. This becomes a critical moment in his emerging consciousness that moves Schindler to take action against the horrors around him.

The True Meaning of Family

In his preparation for the trial, Justice Bach read the autobiography of Rudolf Hoess, the commandant at Auschwitz-Birkenau concentration camps.

In the book, Hoess recounts a conversation he had with Adolf Eichmann who vehemently argued for the extermination of children first so that the Jewish people will never again repopulate Europe. Bach read this passage in Hoess’s book just before first meeting with Eichmann in his prison cell.

In Omaha, Bach recalled that when sitting just inches away from this man who played a leading role in the annihilation of European Jews, “It was difficult for me to keep a poker face at this particular point in time.”

As I sat listening in quiet respect for this incredible man, tears welling in my eyes, I thought once again about my family.

Without a further word, our eyes locked motionless in deep connection and profound comprehension. And I felt a sense of peace.

SOS: Cher drops another track from her album of ABBA covers