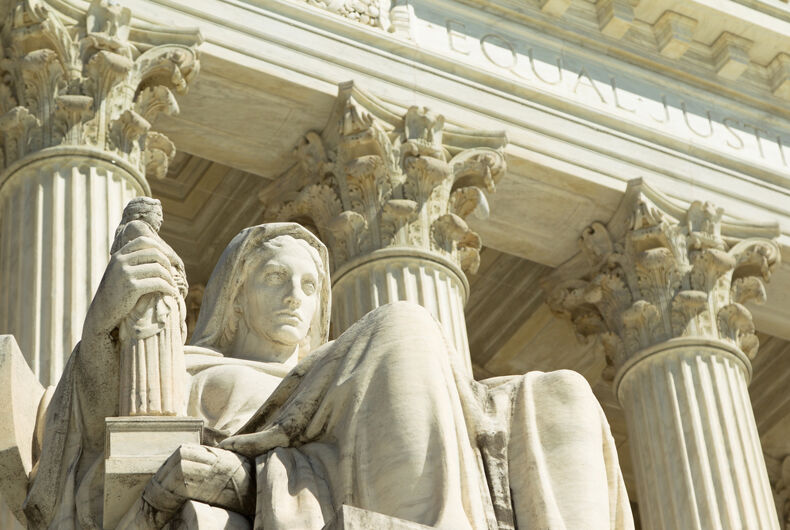 In a move that puts them in league with former Alabama Judge Roy Moore and a leading anti-marriage religious right group, sixteen states have asked the Supreme Court to reaffirm the right of employers to fire you if you are transgender.

At issue is the case of a Michigan funeral home chain that fired one of its funeral home directors after she told them she was transitioning. The employee, Aimee Stephens, sued R.G. and G.R. Harris Funeral Homes on the grounds that her dismissal was sex discrimination under federal Title VII law, which prohibits gender discrimination. (There is no employment protection in Michigan for LGBTQ people.)

At the time she filed her suit, Stephens had the full force of the Obama administration’s Equal Employment Opportunity Commission (EEOC) behind her. Still, the first judge in the case ruled that the funeral home’s religious liberty rights superceded Stephens’. However, earlier this year, a federal district court reconsidered the case and ruled in Stephens’ favor.

Which flipped out the religious right. Hence, the push to get the Supreme Court to consider the case so that the justices (with an assist from nominee Brett Kavanaugh) can enshrine discrimination.

The states, who are joined in the friend-of-the-court brief by Maine Gov. Paul LePage, Kentucky Gov. Matt Bevin and Mississippi Gov. Phil Bryant, argue that the Title VII law doesn’t apply because at the time it was drafted in 1964 “sex” “referred to physiological distinctions between females and males, particularly with respect to their reproductive functions.”

In essence, the law is frozen in time and without explict updates to include gender identity, it can’t be interpreted to protect transgender employees.

Among the others filing briefs in the case is the Alliance Defending Freedom (ADF), which has been designated a hate group by the Southern Poverty Law Center. That doesn’t mean ADF isn’t effective.

It represented the Colorado baker in the Masterpiece Cakeshop ruling. In that case, the Supreme Court issued a narrow ruling in favor of the baker’s religious liberty rights, largely because retiring Justice Anthony Kennedy limited the scope of the ruling.

And then there’s the Foundation for Moral Law, which is the legal group founded by twice-removed Alabama Supreme Court Judge Roy Moore. Moore, still smarting from the loss of his Senate race last year amid accusations of pedophilia, has relied upon the Foundation for a regular salary and the promotion of his political career.

The Foundation says the case is about “crossdressing” and warns of terrible consequences that will follow if Stephens’ victory isn’t overturned. “If the Sixth Circuit’s decision is allowed to stand, then employers will probably make everyone in their workplace respect the pronoun and bathroom preferences of the transgender employees,” Matt Clark, an attorney for the Foundation, says in a press release.

Yes, the horror of employees being respected.

It’s an open question whether the Supreme Court will take up the case. The Court only picks a handful of cases, with clear constitutional issues. On the other hand, it only requires four justices to grant a review of a lower-court decision, and the current (and soon to be future) disposition of the Court may tilt in favor of that review.

The Trump administration is in the odd situation of having different parts of the government taking different positions. The Justice Department is clearly on the side of the states and religious right groups filing the brief. By contrast, the EEOC brought the lawsuit on Stephens’ behalf.

The administration has been granted an extension for its response to the request for the Supreme Court to consider the case. It has until late September to come back with its response.

Under Jeff Sessions’ leadership, no doubt it will look an awful lot like the brief that the states just filed.

I met the man who prosecuted notorious Nazi Adolf Eichmann. It changed my life.