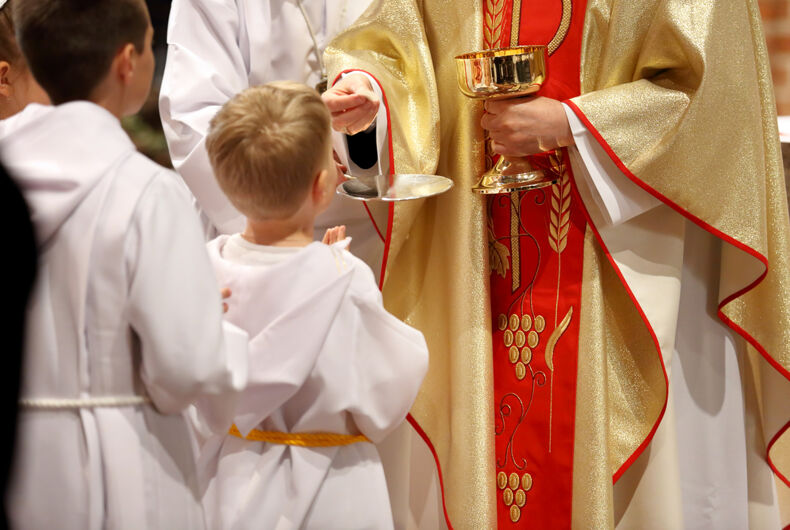 There is not a more important position that our community has to take a stand on than the Catholic Church’s institutionalized rape of children by priests, bishops and cardinals.

Did you read that? Child rape!

That’s what the Pennsylvania Attorney General’s report details – along with children being tied up and whipped and a kiddy-porn ring run by priests. The report estimates 300 priests, bishops and cardinals have in some way been complicit in the rape or sexual assault on over a thousand children – and that’s just in Pennsylvania.

Put that together with the same form of scandals in Boston, Arizona, Washington D.C. and other countries over the last few years and the list of little girls and boys being sexually abused soars into the tens of thousands.

In the U.S., it all started when the U.S. Council of Bishops attempted to cover this affliction by its “religious leaders.” They didn’t call the police, but instead transferred priests to other positions,  denied the allegations even when they knew they were true, and at one point, tried to ship those records out of the country so police couldn’t get their hands on the evidence.

And let’s not forget fighting changes to the the statute of limitations. The change would allow officials to charge a church authorities with their crimes five or 10 years later, and not allow them to go skipping into a nice retirement.

His Holiness the Pope has said he’s on the side of the victims and yet, the victims are saying these are just words that they’ve heard before. I have a suggestion that can put the Pope’s words into action: Tell cardinals and archbishops to support the end of statute of limitations laws so that the child rapists in the church are brought to justice.

Those 300 priests and bishops who were named in the Pennsylvania Attorney General’s report might not be charged due to that law. And here’s the kicker — there’s only one organization in the state fighting that: the Catholic Church.

Excuse me, but shouldn’t it be, “Don’t trust your children with priests, bishops and cardinals?”

Tens of thousands of children beg you not to.

Mark Segal, publisher of Philadelphia Gay News, is the nation’s most-award-winning commentator in LGBT media. His memoir “And Then I Danced, Traveling the Road to LGBT Equality” was named Book of the Year by The Association of LGBTQ Journalists.

Teachers bearing arms makes as much sense as people arming bears. None.