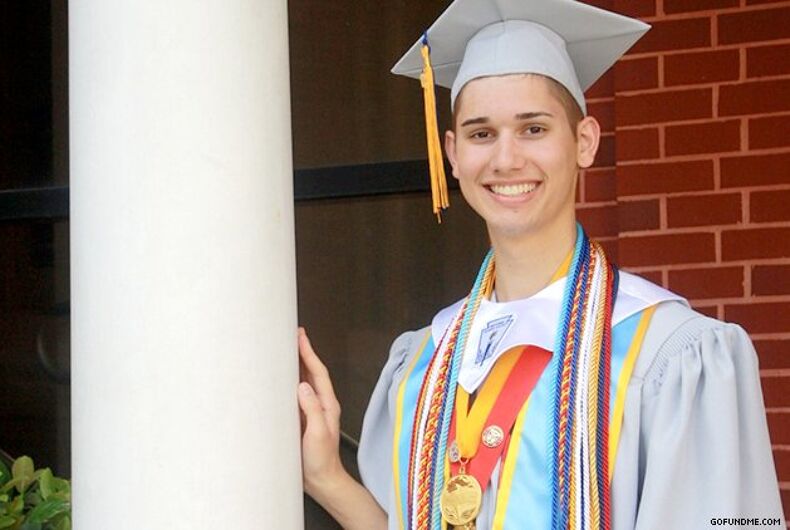 Jacksonville, Florida, student Seth Owen was kicked out of his house because he is gay. He went on to become his class co-valedictorian. Photo: GoFundMe

Jacksonville, Fla. student Seth Owen, 18, had a 4.16 GPA and all the promise of the future. He just had no money to make it a reality. After his parents kicked him out of the house for being gay, he was on his own.

That’s when the town chipped in to help fund his college education and raised over $120,000 (the original crowdfunding goal was set at $100,000) so that he could attend Georgetown University.

However, an incredible thing happened after all the money was raised: Georgetown decided to waive his tuition. Completely.

The initial $20,000 tuition fee that hung over him for the first year was suddenly gone. A door that had seemed closed made room for a window to open.

“While the campaign has been ongoing, the professionals at the Office of Student Financial Services have continued to work with me to make my dream a reality,” Owen said in a statement. “Due to their efforts and attention, they were able to adjust my aid package even further, my expected contribution is now $0. With these new adjustments, I will be able to attend Georgetown University this fall.”

Owen told NBC News that he had moved out of his parent’s home in February after multiple arguments pertaining to his sexuality. He had endured over a year of attempted “conversion therapy” with their prodding.

He lived with friends and worked to carry his financial weight – almost full-time while finishing high school at the top of his class as the co-valedictorian.

“The Office of Student Financial Services was instrumental in helping me enroll in the Georgetown Scholarship Program, whose purpose is to make attendance at Georgetown possible for students in a financial situation similar to my own,” Owen said. “This program also includes mentoring and networking opportunities, which will help me to assist others in situations similar to the one I found myself in earlier this year.”

Paying it forward was always a part of Owen’s plan, but it’s more real now than ever before.

“At the moment, I am in process of exploring the establishment of a scholarship to help LGBTQ+ scholars who find themselves in the circumstance I was in earlier this year,” he said. “I am looking forward to utilizing the resources of Georgetown to help with this effort.”

And in typical Owen fashion, he parted his statement with: “I will be seeking to pass on the kindness and generosity that I have been shown.”