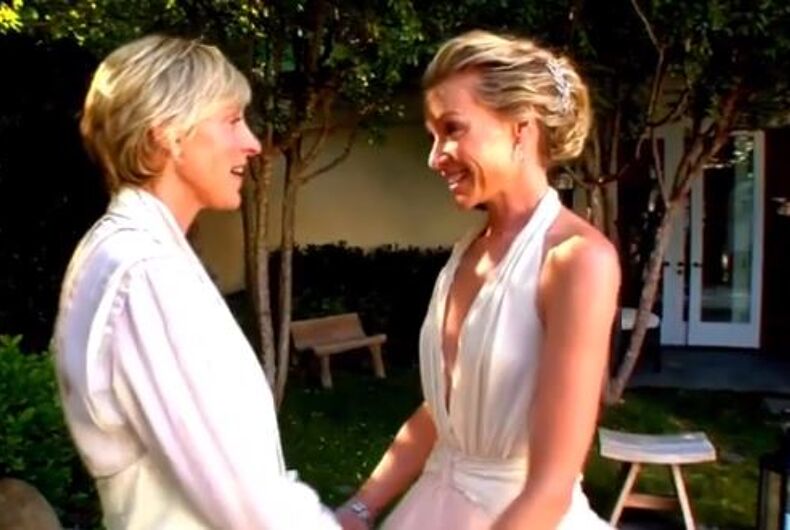 Lesbian powerhouse Ellen DeGeneres took some time for her fans, friends and followers by allowing them into her ultra-private life with actress wife Portia de Rossi. The special occasion? Their super special wedding anniversary.

The two were married at their Beverly Hills home on August 16, 2008.

Both stars took to their own social media accounts with videos posted in homage to their wedding day 10 years ago.

“This was such a special day for us,” DeGeneres wrote to accompany her video post.

“You look beautiful,” de Rossi can be heard saying in the clip. That’s when the tears welled up for DeGeneres as she repeated.”Oh, my God!”

Ten years ago today. This was such a special day for us. ❤️

As for de Rossi’s video, a special message was posted that captured the plight of the LGBTQ movement in 2008.

The Arrested Development star shared in her post: “10 years ago today, Ellen and I were married. We wanted to share Wayne Dyer’s poignant and special words with you to remind us all how far we’ve come – that we are living in a country that supports #marriageequality #waynedyer.”

Wayne Dyer officiated the lesbian wedding of the decade and shared at the time, “My dear Portia and Ellen, today we have taken a giant step forward toward the ideal that all of us, with no exceptions, are not only created equal, but we each have the unalienable right to pursue our own happiness.”

10 years ago today, Ellen and I were married. We wanted to share Wayne Dyer’s poignant and special words with you to remind us all how far we’ve come—that we are living in a country that supports #marriageequality #waynedyer

Throughout the Hers & Hers video set, fans caught a never before seen glimpse into the celebration that included not only DeGeneres and de Rossi, but also family members, friends and the couple’s fur creatures.

Same-sex marriage rights were legal at the time of their nuptials, but would be revoked just a few short months following their wedding. It would take another five years until same-sex couples could marry again in the state (although their marriage retained legal status during this time). Seven years later, same-sex couples were allowed to marry nationwide.