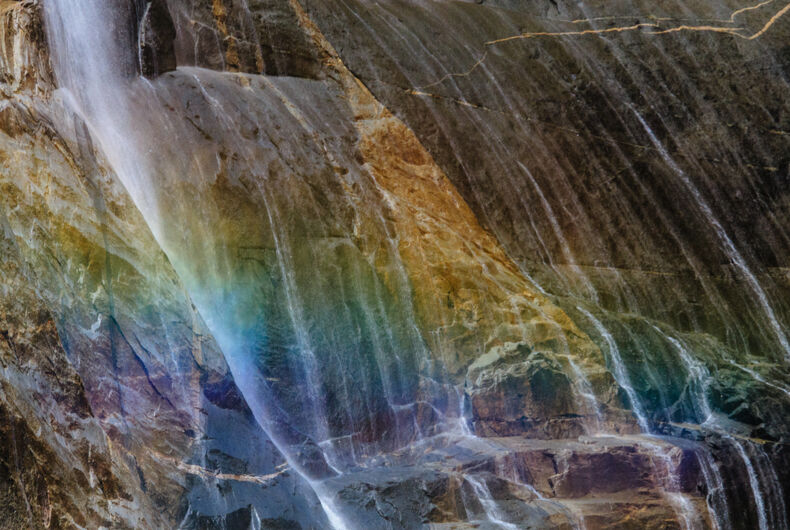 A telephoto shot of water being deflected by a rock in the upper yosemite falls, with a rainbow directly in front of it.Photo: Yosemite National Park, CA

A rainbow captured on video at Yosemite National Park is going viral – and the LGBTQ community is basking in the sunshine, literally. Viewers can see the entire spectrum of the rainbow as the water trickles down from 5,400 feet.

One comment in response read, “I think there are skittles inside.”

And then there were these: “Mother Nature just spews out gay” and “If you look closely you can see the unicorn bleeding.”

Take a look and see for yourself below.

Not to be outdone, one person wrote that the Yosemite rainbow was an homage to Info Wars host Alex Jones.

The alt-right hatemonger, who once claimed that the government was putting chemicals in the water to make frogs gay, was recently banned from Facebook, Twitter, Apple, Spotify, YouTube, and Vimeo.

Jones said back in 2015, “Proof! Gay frogs are real! Due to clips of me talking about it…they’re admitting that the majority of frogs in most areas of the United States are now gay. They don’t choose females, they go over to the male and then they go and live together.”

“Is this the water that was turning all the frogs gay?” a user asked on the Yosemite rainbow clip.

The response was a deadpan, “You say that like you have proof frogs weren’t rampantly gay in the first place.”

To which the original commenter replied, “Maybe the frogs caused the water to possess the big gay.”

My dearest friend in the world is gone. Gilbert Baker gave the world the Rainbow Flag; he gave me forty years of love and friendship. pic.twitter.com/titd3XZ0zD

The creator of the Rainbow Flag, Gilbert Baker, died last year at the age of 65. He invented the symbol 40 years prior as a way to unite the LGBTQ community.

Activist, author and civil rights leader Cleve Jones wrote of his friend at the time, “My dearest friend in the world is gone. Gilbert Baker gave the world the Rainbow Flag; he gave me 40 years of love and friendship.”

Is the GOP stripping benefits from straight couples to protest same-sex marriage?