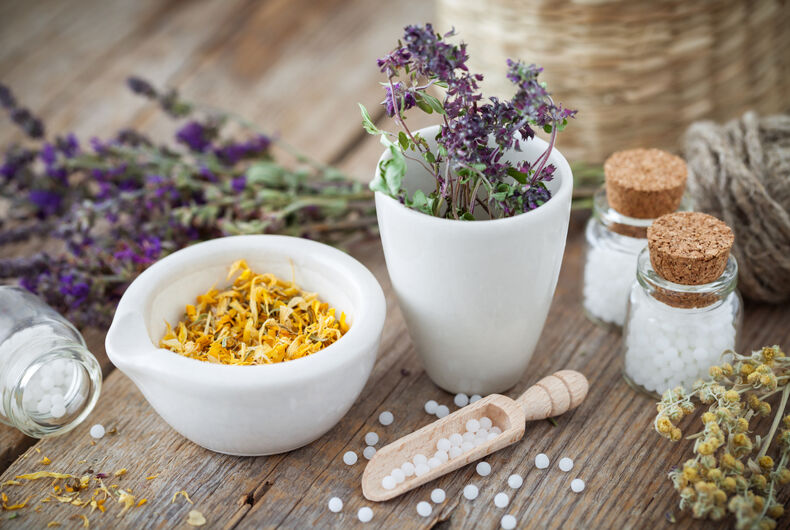 Mortar and bowl of dried healing herbs and bottles of homeopathic globules.Photo: Shutterstock

A doctor in Switzerland has come under fire for recommending a homeopathic conversion therapy treatment.

Jean-Yves Henry, a French doctor who practices medicine in Geneva, published an article on his website in 2009 about treating homosexuality with homeopathy.

The article stresses that homosexuality is not a disease, but a symptom of a deeper problem of denying the differences between the sexes.

Henry goes on to cite depression and suicide as possible results of homosexuality, never considering that perhaps it’s homophobia that is more responsible for them.

Henry’s suggested treatment for male homosexuality is Argentum nitricum (for chronic infidelity), Pulsatilla (for immaturity), and Platina (for troubles related to seduction and domination).

For lesbianism, the doctor recommends Lachesis (for domination and jealousy), Sepia (to accept one’s femininity), and Natrum muriaticum (for anxiety and disliking being touched).

The Minister of Health in the Canton of Geneva, Mauro Poggia, wants to open an investigation into Henry, saying that calling homosexuality a disease is “sufficient to opening an investigation.”

Since the article was linked to on social media this past week, Henry added a note saying that he is being “lynched in the media.”

He says that homosexuality is just one symptom of a disease, like a headache or an allergy, and a homeopath would take the symptoms together to develop a remedy. He also wrote that he’s keeping the article online to support “free thought.”

While homeopathy lost popularity in the U.S. in the mid-20th century, it remains widespread in Europe, especially in France, where pharmacies sell homeopathic solutions and licensed doctors claim to practice homeopathy.

Unlike herbal treatments of diseases, homeopathy is based on the idea that not taking a treatment will cure a disease. Solutions of a plant or mineral are diluted to the point that they’re pure water, and that water is supposed to carry the “memory” of the molecule that was in it. The liquid is either sold or dropped on sugar pills, where it supposedly leaves the “memory” on the pill as the water evaporates.

Needless to say, water has no brain or nervous system and therefore cannot remember things.

Despite numerous studies on homeopathy, no proof has been found that it can treat any disease. Even Henry’s article alludes to this fact by citing the thoughts of other homeopaths as “proof” that his treatment will work instead of clinical trials.