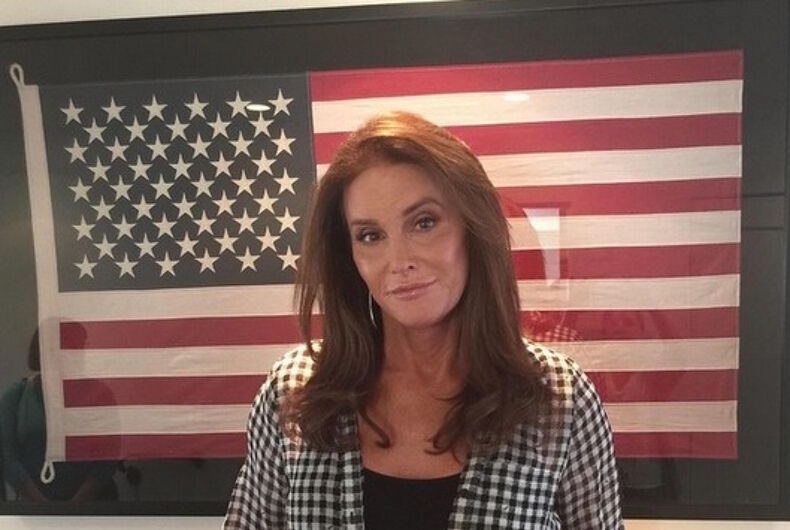 Jenner, one of America’s best-known transgender women, is a Republican. She’s rich and white and frequently clueless about the lives of average transgender people. That doesn’t make her a horrible person; it makes her a typical Republican.

She’s said stupid things in public and offered her opinion on topics she doesn’t know anything about. She’s hidden parts of her life from public view and used social media to promote herself in a positive light. That doesn’t make her worthy of derision; it makes her a typical American.

Sometimes she uses thoughtless language or enjoys a movie that has problematic characters or actors when seen through an activist lens. That doesn’t make her awful. It makes her you.

In an interview with Variety in their new “Trans Hollywood” edition, Jenner opened up about the constant attacks from the trans community and progressive activists and what she’s been doing while no one was looking.

“I don’t do a lot of media. I don’t want to be seen everywhere,” Jenner told the magazine. “Today, I’m very politically involved. Nobody really knows it. I do it very quietly because I have been so criticized by the liberal side of the media. I can get more things done if I don’t stick my nose into everything publicly.”

Jenner says she’s met with multiple administration officials and roughly 50 Senators and Congress members. She’s answered the invasive questions about her genitals that transgender people get tired of being asked. She’s done her best to put a face and a name to a nebulous group of people most Republican legislators don’t know.

“I met with Paul Ryan,” she said. “I’ve met with just about everybody. Publicly, they aren’t supportive of transgender rights,” but “I’ve never had anybody not be nice to my face.”

Being nice to someone’s face, but legislating against their civil rights doesn’t advance the cause, of course. A smile is cold comfort when you’re being refused admission to the military or can’t use the restroom in public.

But it’s important to remember that it wasn’t that long ago that Democrats were in the same position – and so were the celebrities who lobbied them to change their views. Only under the last administration did the majority of Democrats support same-sex marriage. A Democrat president gave us the policy that more-or-less banned gay military servicemembers.

Even when the party controlled both houses of Congress, we couldn’t round up enough of them to pass basic nondiscrimination legislation that included transgender people. “Blue dog” Democrats holding seats in typical Republican territory killed it.

Meryl Streep and Lady Gaga are hardly political geniuses. Both are famous women with strong opinions who advocate on the national stage for their political beliefs. Elizabeth Taylor wasn’t a medical doctor or scientist and didn’t have HIV when she joined the fight to stop AIDS and support LGBTQ rights. She was a famous actress with a boatload of money to spend on the issue.

They all said stupid things and mouthed off about issues they have no lived experience dealing with. They all made a difference in pushing politicians to turn around and support the issues that make a difference in our lives – even if it doesn’t in theirs.

That’s something to be applauded, not castigated. And for Streep, Gaga, and Taylor we have – and continue to do. Jenner, however, is a Republican.

And while it’s vitally important to remember that the Republican party is not a friend to LGBTQ people, there has to be someone who can speak their language and change their minds without kowtowing to their agenda.

Jenner gave Trump and Ted Cruz the benefit of the doubt because she didn’t know better. She’s admitted she was wrong. That’s more than most Trump and Cruz voters will do. That’s better than most gay Republican groups, for that matter.

“Think of your average Republican in Washington,” Margaret Hoover, the president of the American Unity Fund, a pro-LGBTQ Republican group, told the magazine. “It’s basically like every white friend of your 70-year-old dad. At the 1976 Olympic Games, they were all in the prime of their life, and Bruce Jenner was their hero. They idolized Bruce.”

“That may be the first time they’ve met anybody who’s trans,” Jenner said. “I want that to be a pleasurable experience. I want to be nice to people. I want to have a smile on my face. And they walk away and say,  ‘Oh, my God! Caitlyn was so nice.’ That’s the way I want them to think of trans people. That we’re nice.”

So why can’t the LGBTQ community be nice in return?

“No matter what you say or do, they think you don’t get it because you’re this kind of white, privileged person,” Jenner told Variety. “I’ve felt it big time, and it hurts. Sometimes this community can be really tough.”

So maybe the next time she says something dumb, we’ll stop and remember that we probably do too every single day. Because it’s time to stop hating on Caitlyn Jenner.

She’s doing the best she can to help our community. And that’s more than some of us can say.