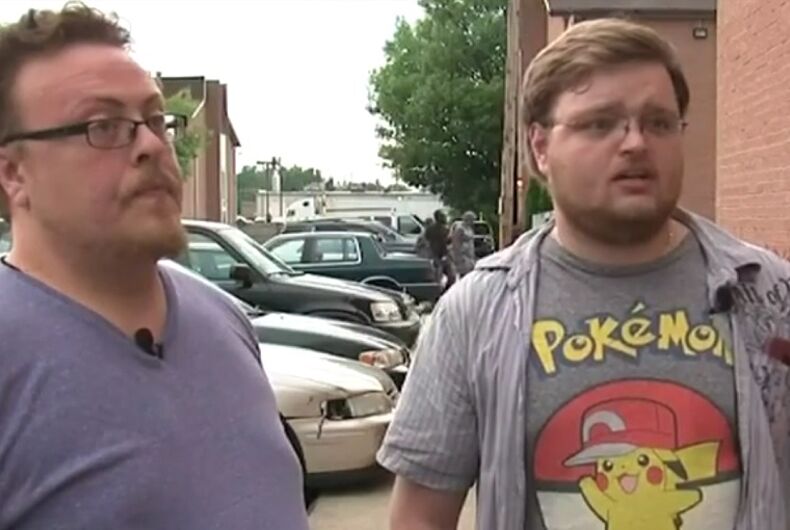 In an encounter that was partly recorded on one of the victims’ cell phones this past Tuesday, Michael Coward of Columbus, Ohio, went to check his mail just as a United States Postal Service worker was delivering it.

This annoyed the worker, who wanted Coward to wait until she was finished.

“I started arguing with her and she called me a faggot,” he said.

The argument escalated from there.

“And then she just kept going on and on and on about me and my fiance being white faggots,” Coward said.

Coward took out his phone to record the encounter. While the postal worker doesn’t use the word “faggot” in the clip, she confirms that she said it multiple times.

“You’ve called me a faggot at least 10 times,” he told her in the video.

She replied, “I called you what you are.”

Coward and Vaughn said that she then took their names off their mailbox and said that they wouldn’t get mail again.

“You’re telling us that you’re not going to deliver our mail because we’re… ‘White faggots,'” Vaughn said. “I don’t think that’s how that works.”

On Tuesday evening, the USPS said in a statement that they were taking the incident seriously.

“The allegations made against a Postal Service employee are very concerning,” the statement said. “These actions – if true – are not consistent with and don’t represent the values of the Postal Service organization and will not be tolerated. You can be assured that this alleged incident is being fully investigated and that the Postal Service will take whatever action is appropriate.”

This Republican compared LGBTQ people to rapists. But will it affect his re-election?