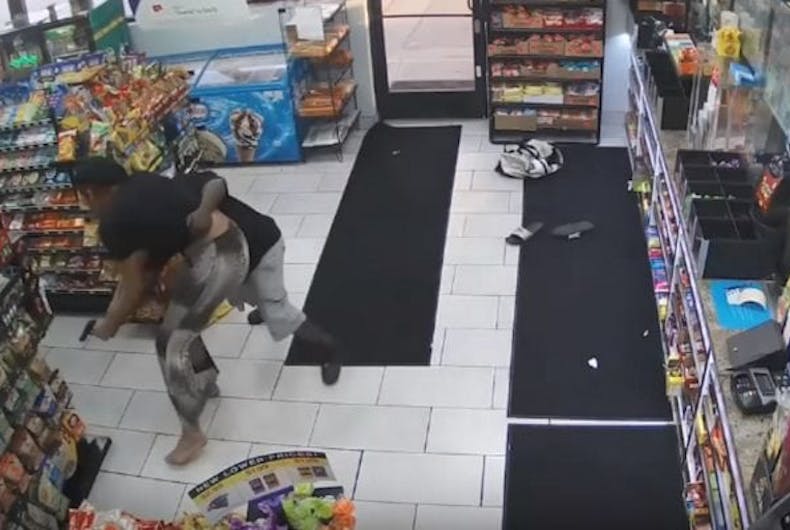 A transgender woman in Detroit wrestled with her attacker this week in an effort to save her life. The thing is, he didn’t expect her to be so damn strong.

The gun fight occurred Monday at a gas station on the city’s west side.

The 29-year-old suspect, Deonton A. Rogers, was arraigned Saturday on charges of “firearm discharge causing a serious injury, felonious assault, felony firearm, felon in possession of a fire arm, child abuse in the fourth degree and ethnic intimidation based upon gender,” according to the Detroit News.

The assault happened after Rogers walked up behind the victim and made a lewd comment to her.

He pulled the gun out and she fought for her life. However, the gun went off during their entanglement and she was shot.

She ultimately made a full recovery.

Luckily for the 29-year-old victim, the whole shebang was captured on CCTV.

Rogers was not alone at the scene of the crime. He had a 27-year-old companion and a child with him. After he fled, the child was found in the back seat of the car without incident.

“Great work by our team, particularly our 12th precinct special operations… who relentlessly follow up on tips we were getting from the community,” Detroit Police Chief James Craig said. “That suspect has been taken into custody without incident.”

Bail was set at $2 million.

CCTV footage showed that the woman appeared to have the upper hand throughout the gun fight.

Karma? Or a bad day for transphobic trolls in Detroit? We’ll let you be the judge.

Ginsburg says she plans to stay on the Supreme Court for 5 more years.