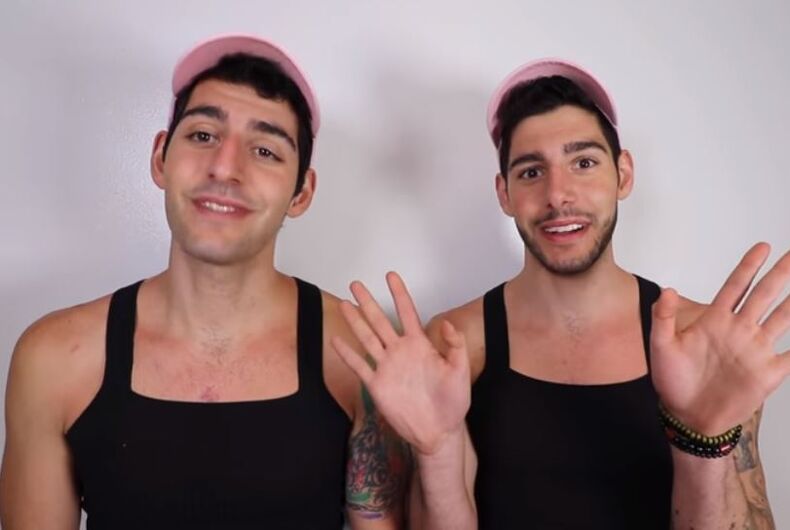 Identical Iraqi twins Michael and Zach Zakar are busting all stereotypes by being their gay authentic selves on camera – even when their own community shuns them.

The two are the masterminds of an Instagram feed with a following over 60,000 strong.

“Our content is something that really hasn’t been seen before because we’re showcasing a different light on Middle Eastern men,” Zach told PinkNews.

“People say, we’re too much, we’re too loud and Iraqis shouldn’t be that way,” Zach added.

Let’s not normalize rape culture. Due to our recent story, we want to tell others: Be as naked as you fucking want, but no one ever “asks for it.” The entertainment industry needs to stop turning a blind eye. #SpeakUp

They’ve come a long way from the time they both came out to their mother and she threw holy water on them.

The two words neither of them were prepared to hear. Yet. Maybe ever.

Their book, Pray the Gay Away, was inspired by the night their Mom snuck into their bedroom and force fed them “holy grapes.” The Zakar twins wrote that she was determined to “de-gay” them.

She’s not been the only one to speak out in opposition.

“I think one of the biggest issues in the Iraqi is that they want to be accepted in America through immigration and what-not and they can’t accept their own gay brothers or sisters,” Zach said.

Michael chimed in that the two are “an embarrassment.”

So, they did what any two identical gay twins from Iraq would do. They dove right in even deeper.

On Instagram, two regularly discuss their interest in men, even so far as to gush over their “types.”

They even read each other’s Grindr messages, for Heaven’s sake.

Trump has declared war on LGBTQ rights. Here’s everything he’s done so far.

He tried to kill a trans woman at a gas station. It didn’t go like he expected.