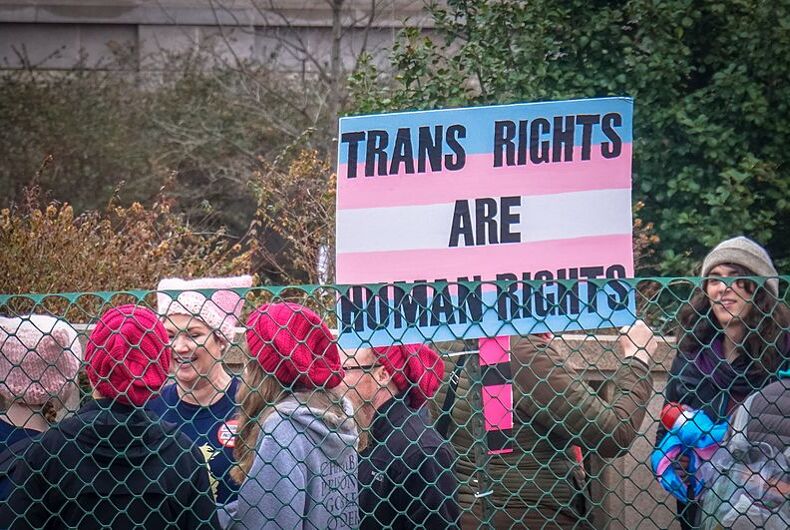 UPDATE: The National Center for Transgender Equality says that fears sparked on social media that transgender people’s passports are being denied are overblown.

“NCTE has investigated recent concerns about passport processing for transgender people,” the group said in a statement. “All of the incidents we have seen involved unusual circumstances and bureaucratic mistakes by the passport agency and have caused very unfortunate hardship and anxiety for our community members.”

“Please note, the longstanding passport gender marker policy has not changed. We are closely monitoring the issue and are vigilant for any attack on the rights of our community.”

The group directs people to the State Department “Gender Designation Change” page designed for people wishing to update their gender on their U.S. passports along with instructions on how to fill out and file the required paperwork. There is also a medical certification template available for doctors to access.

“I am sharing my process because it is isolating and terrifying in the current context of our government,” she wrote. “I have faith that it will eventually get to some resolution, until then it is complex problem with a unique set of facts and other people should not fear their own ability to get a passport.”

A recent string of anti-trans events in the U.S., including anti-military rhetoric and denial of U.S. passports to trans citizens, has the country in turmoil. Are trans people suffering the burden of proof for basic human rights? Two trans women say yes.

Gender Justice League Executive Director Danni Askini‘s home base is in Seattle, but the says she is in temporary “exile” because the U.S. State Department refuses to renew her 10-year U.S. passport. And now she faces possible arrest at the border should she attempt reentry.

“Today I was denied a renewal of my U.S. passport and told I would need to get a judge to unseal child welfare records from foster care in order to ‘prove’ my U.S. citizenship,” she tweeted on July 3, 2018. “Despite having had all ‘female’ ID since 1999, they are now demanding ‘proof of transition’ for the 1st time.”

“Make no mistake, this was an intentional action by the State Department to withhold recognizing my gender,” she said according to them.

She was eventually provided a temporary emergency passport.

Another woman, Janus Rose, corroborates the story with her own; her U.S. passport was revoked due to what the government stated was an “error.” She’ll need to provide a doctor’s note affirming her gender marker in order to have it reinstated.

Rose is a New York-based technology researcher who had a female gender marker listed on her U.S. passport since November 2017.  When she finalized a legal name change and submitted her documents for an updated U.S. passport, it was denied.

She received a phone call from a passport processing center in South Carolina.

“She basically told me that even though the government had changed my gender marker in the last year, that was a mistake,” Rose told them.

The worker explained to Rose that the medical documentation she supplied was not sufficient backup for the gender change on her U.S. passport.

“This letter is something my clinic has been using as a boilerplate for years for so many people,” Rose says. “The clinic says I’m the first person to get a rejection.”

“Things are getting really dark in America,” Askini said. “How many canaries have to die in the coal mine before people realize the current regime is totalitarian?”

Wow. The U.S. passport office just called and told me that due to an “error,” the government has *retroactively invalidated* the change of gender marker it authorized on my passport last year. They won’t renew my passport w/ correct name & gender until i submit a new doctors note

Editor’s note: Quotes from Danni Askini have been removed at her request.