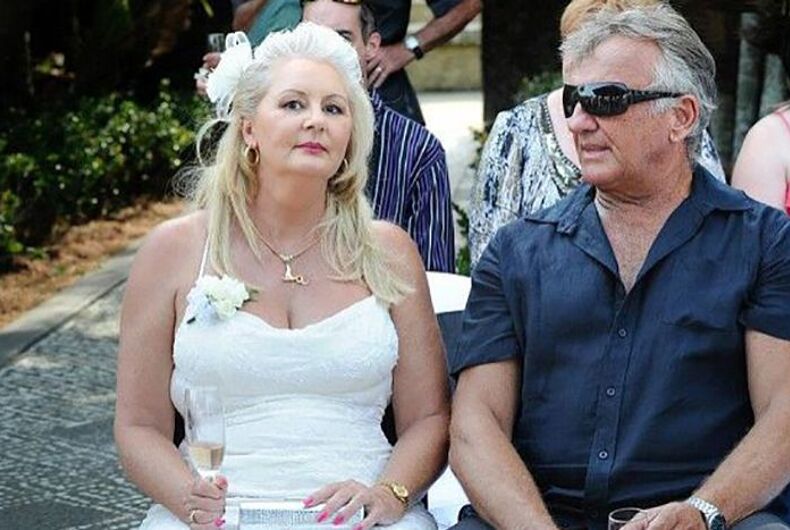 Australian Lindy Yvonne Williams is on trial for murdering her former boyfriend, George Gerbic, after confronting him about his bisexuality. Gerbic used another phone to communicate with a male partner.

Williams pleaded guilty to interfering with a corpse. She admits she wrapped Gerbic’s headless torso in a tarp, drove it 50 miles away, dumped it beside the road, and lit it on fire. It took police 10 months to identify the remains.

But Williams insists she did not murder her former lover. She claims she walked into their home following the fight and discovered Gerbic’s body already dismembered. In a state of panic, she says she tried to dispose of the body.

After the two fought over Gerbic’s bisexuality, Williams says he became violent and cut her arm with a knife. He slipped on her blood and fell to the floor, knocked unconscious. She says she locked herself in the bedroom and when she emerged, he was still lying where he had fallen.

Williams left Gerbic for a few days to stay at a hotel. When she came back home, she says, the body was gone.

“She told police that when she arrived, George was no longer lying on the floor where she had last seen him … so she thought he was okay,” prosecutor Todd Fuller jurors. “She said she headed down towards the bedroom… and she discovered his torso, she says, wrapped in plastic on the floor.”

Unfortunately for Williams, this version of Gerbic untimely demise doesn’t match what she had already told investigators.

After the remains were forensically identified, Williams told police that Gerbic was in Brazil to attend the World Cup. She said the two had broken up and he was taking some time alone to think things over.

When police returned, she changed her story to say they had a fight.

Police allege she also accessed Gerbic’s bank account and sent emails and text messages to his friends and family pretending to be him.

Episcopalians will allow same-sex weddings in all churches without exception