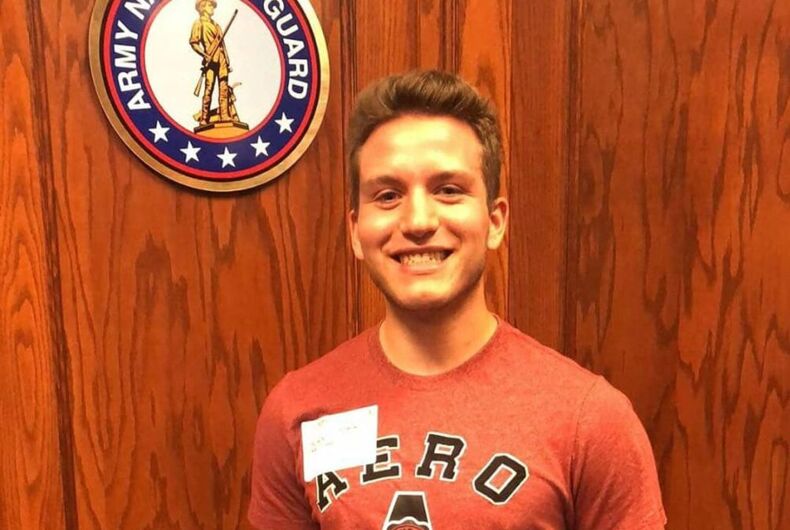 A gay teenager will be challenging one of Ohio’s most anti-gay Republicans this fall.

Nino Vitale represents Ohio’s deep-red 85th state house district. He’s on the far-right, and he got national attention last month for his “Pastor Protection Act,” which prevents people from suing pastors and “religious societies” for refusing to perform or participate in a marriage they don’t agree with.

While Vitale got a parade of pastors to testify in the state legislature for the bill, he couldn’t find a single pastor who was actually sued because they refused to perform a marriage for a same-sex couple. That’s because the First Amendment already protects them.

Garrett Baldwin, who lives in Vitale’s district, decided that someone needed to challenge the incumbent, so he entered the election.

Baldwin probably isn’t the challenger Vitale was expecting (if he was expecting one at all, since the Republican has run unopposed in the past general election). Baldwin is 18-years-old, gay, and a high school cheerleader. He’s a member of the Ohio National Guard and hopes to join the military one day.

“When they hear I’m a gay candidate I don’t get a lot of feedback on that because it’s not important,” he told OutSports. “They want to know what I stand for and how I’m going to move the district in the direction way they want it to go.”

Baldwin is running as a conservative Democrat. He favors restrictions on women’s reproductive freedom and opposes banning assault weapons.

His campaign is focused on Ohio’s opioid crisis and he wants to bring LGBTQ issues center-stage in the election.

“Vitale believes strictly in one man and one woman having children, that that’s his idea of a family,” Baldwin said. “We have multiple LGBT families in the district, and it’s scary that we have a representative furthering those ideas in the statehouse.”

While Vitale’s rhetoric on the Pastor Protection Act centered around members of the clergy getting sued for not performing marriages, the bill also legalized discrimination against LGBTQ people by “religious societies,” a term opponents of the bill say is “undefined” and includes more than just churches.

“Property and services rented to the public at large must be available to all, regardless of race, sex, religion and other protected characteristics,” said Equality Ohio Director Alan Jochum in a statement.