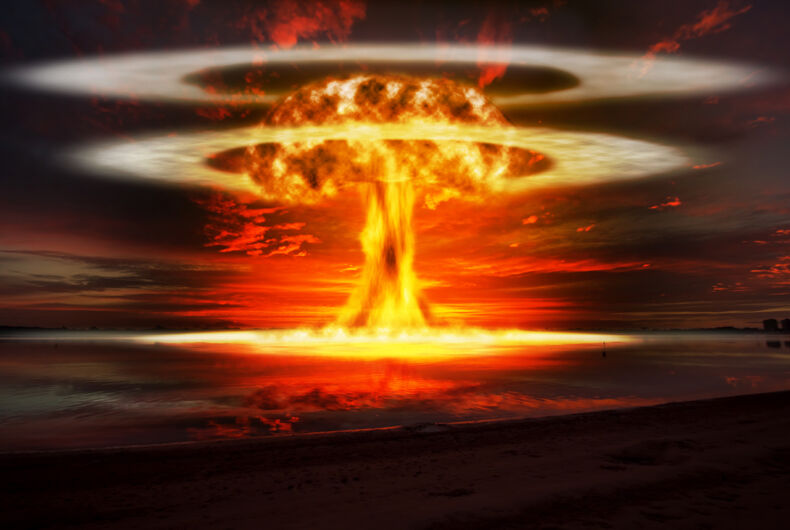 Events of the past week may have you believing that we are witnessing the end of civilization as we know it. You may be surprised to learn that the religious right agrees with you, but for entirely different reasons.

All the right’s victories over the past few months play into the belief of many evangelicals that we are living in the end times. That is the period when a series of events will usher in the second coming of Christ. Believers will be suddenly transported to heaven (the rapture), while nonbelievers will face turmoil and tribulation, thanks to the anti-Christ. As many as two-thirds of evangelicals hold this belief.

As is befitting a religion that is all but synonymous with a political party, conservative evangelicals are looking at current events and seeing Christ right around the corner. Televangelist and convicted felon Jim Bakker said on his television show that God himself told him as much.

“This is what He told me,” Bakker claimed. “He said, ‘Donald Trump is a respite in this troubled times and I sent him in grace to give you time to prepare for what’s coming on earth.’”

Bakker is hardly alone in his thinking. A wide range of ministries argue that the end time is approaching, and they’re thanking Trump for it.

“I will say that Donald Trump is probably one of the biggest things to happen to End Time Bible prophecy,” Erika Grey, an end time preacher, said last year. Big name ministers, like Franklin Graham (channeling his father), don’t say for certain that these are the end times, but flood their websites with messages supporting the idea.

Some of the belief has to do with the rising power of Vladimir Putin. Some end-time ministers see him as the agent unleashing the world chaos that foretells the start of end time.

But the main reason for the idea that the end is nigh is the burgeoning crisis in the Middle East. Conservative envangelicals were ecstatic about Trump’s decision to move the U.S. embassy to Jerusalem, because they saw that as a necessary step toward end time. That’s why so many religious right leaders were present for the opening of the embassy last spring.

Of course, conservative Christians have been predicting the end time for decades. Barack Obama was labeled the anti-Christ when he was president. In the early 1970s, the fact that there were seven nations in the European Economic Community was seen as proof, while the Six Day War between Israel and Egypt in 1967 was yet an earlier sign. There have been no shortage of false alarms.

Belief in the end times further cements the tight bond between Trump and evangelicals, his core of support. If Trump is the vessel to bring about the coming of Christ, any attack on him is as much religious as political.

The next time you scratch your head about why conservative Christians would stand up for someone as pagan in his behavior as Trump, keep in mind that it’s not really about Trump at all. It’s about his role in the end of the world – the very thing that keeps the rest of us awake at night.

I don’t have to think. I’m a Trump supporter.

Journalists’ listserv shows how prevalent transphobia is in the media