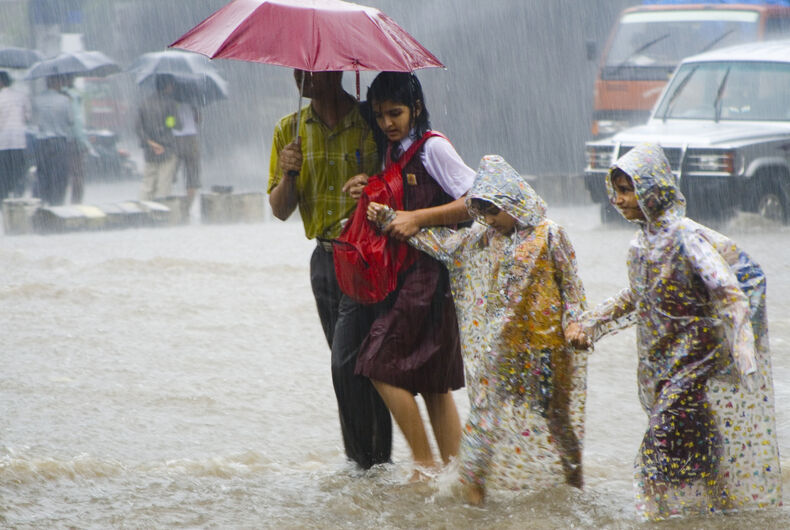 Jun 2007: Three children go to school with their parent in monsoon rain in Mumbai, India.Photo: Shutterstock

The U.S. is working very closely with the Government of Thailand to help get all of the children out of the cave and to safety. Very brave and talented people!

The person who wrote this tweet for President Trump showed concern for the people hoping to save 12 young boys and their soccer coach trapped deep within a cave in northern Thailand since June 22. Trump, meanwhile, shows only scorn for the thousands of children his immigration officials have separated from their parents on U.S. soil.

Even for Donald Trump, cynical hypocrisy has hit a new low.

The eventual safe extraction of the youth soccer team has always depended on international cooperation and assistance. Literally over one thousand people from across the globe have come to Chiang Rai, Thailand to offer their expertise for the effort.

People have not quibbled over which nations are or are not paying “their fair share” to get the job done.

Led by a team of 40 Thai Naval personnel and 50 military and civilian experts from disparate countries, aid has come in the form of technical, logistical, medical, and material support.

Many people came as volunteers traveling to Thailand on their own dime: specialized cave divers, doctors, nurses, engineers assisting in pumping water from the cave and increasing the oxygen count, which fell to dangerous levels.

Officials labeled the time they began the actual extraction of the boys and their coach as “D Day,” since their window of opportunity was soon to close with the forecast of torrential monsoon rains, which would reflood the cave – possibly drowning all captured inside.

We have learned from our history of Donald Trump that he doesn’t learn from history.

The famous D-Day begun on June 6, 1944, included 156,000 allied troops from the United States, Britain, Canada, and service members in exile from occupied Europe. They too risked everything, this time to pump the toxic deadly wave of fascism from the vast and deep European landscape.

They arrived on the beaches of Normandy in France, also then under weather forecasting deadlines, where many perished to set others free.

This ultimately successful alliance, through the North Atlantic Treaty Organization (NATO) infused the vital oxygen necessary to sustain a virtual peace on the continent throughout the Cold War following World War II while enabling the spread of a democratic liberal world order to our current era.

No matter how Trump spins it, our alliances with partnering nations have increased the security of all these nations, not the least being the United States. The only occasion in which the Collective Defense Article 5 of the NATO treaty has been applied (when one signatory country has come under attack, all others enter for mutual defense) was following the dastardly assault against the U.S. on September 11, 2001.

NATO countries joined the U.S. in going after Al-Qaeda and the Taliban in Afghanistan. The NATO task force remains today in a non-combat capacity to offer training, advice, and assistance to the Afghan security forces.

Officials in NATO countries then did not quibble about who would pay their fair share of the costs and who would not. They had a job to perform for their mutual benefit.

While all nations have an obligation to assist in their financial commitment to NATO and to their own militaries, our alliances involve and concern much more than money.

When Trump verbally attacks our long-standing and vital alliances while simultaneously imposing rigid tariffs on their products, he jeopardizes national security interests and emboldens his friend, Vladimir Putin, in corrupting the liberal world order.

This man was the victim of a hate crime. So he ran over the attacker with his car.