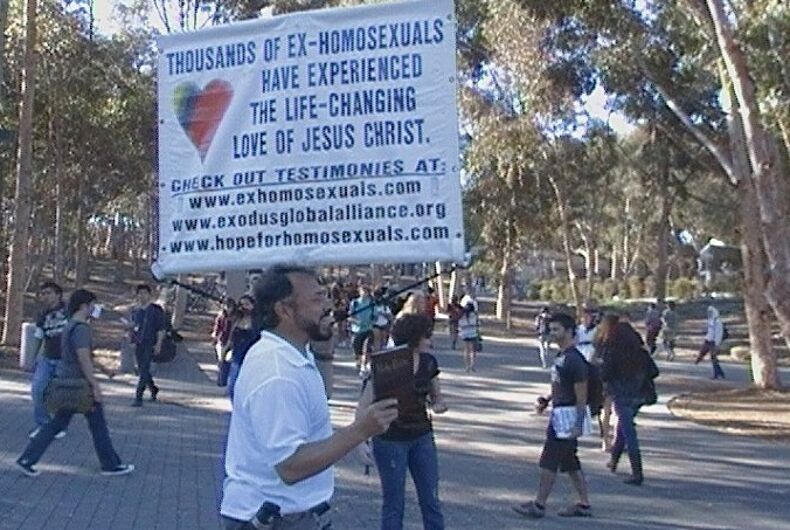 A court has ruled that the city of Syracuse, New York, violated a homophobic street preacher’s right to free speech by asking him to move 40′ away from a pride parade. The “pastor,” who has a penchant for violent and extremely offensive rhetoric will get payday of $127,000 thanks to the misguided ruling.

Jim Deferio is a well-known antigay activist who regularly trolls pride parades. He holds signs similar to Westboro Baptist’s infamous insults and loves to use a bullhorn to amplify his hate.

But when city police asked Deferio to move back past the buffer zone set up for protesters at a local pride festival, they violated his right to demean and terrify attendees apparently. While designated protest areas are a common occurrence and a 40 foot buffer is tiny compared to events like political conventions and campaign rallies, moving to the other side of the street was too much for the court.

The city will have to borrow money to pay Deferio to continue harassing LGBTQ people with ease in the town.

Despite Deferio’s admittance that he advocates violence against LGBTQ people, the court still decided that he has the right to confront and intimidate a minority group.

“If some dude goes into the rest room while your wife or daughter is in there you need to man up and knock the queer right out of them. Show no mercy,” Deferio wrote on Facebook, for example. “Yes, I am advocating violence — justified violence.”

While freedom of speech and the right to peacefully protest is guaranteed to all Americans, as with all rights certain limitations have been established.

US District Court judge Lawrence Kahn wrote in his ruling that the First Amendment “applies to loathsome and unpopular speech with the same force as it does to speech that is celebrated and widely accepted.”

“This annual event, which is free and open to the public, attracts thousands of attendees each year who wish to celebrate the lesbian, gay, bisexual, and transgender community and its allies in Central New York,” Kahn continued.

“Like many similar events across the country, it also attracts attendees who wish to communicate messages to LGBT individuals and their allies that are controversial and may be hurtful. But the right to free speech may not be curtailed simply because the speaker’s message may be offensive to his audience.”

In 2012, a federal appeals court ruled that it was constitutional to limit demonstrations at the Republican National Convention to areas where they couldn’t be seen or heard by attendees. The convention was held in New York. The Democratic National Convention in Philadelphia that year had a 1.7 mile “secure zone” around it.