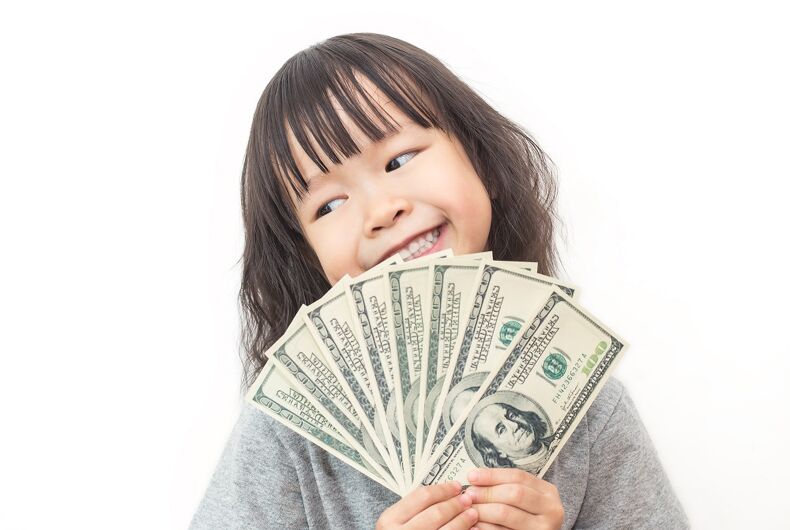 Women earned 82% of what men earned in 2017, according to the Pew Research Center.

Now there’s evidence that suggests that the gender pay gap starts in childhood.

BusyKid, an app used by parents to manage their kids’ allowances, analyzed their data to determine if there is a pay gap when it comes to allowances.

It turns out that the allowance gap is much larger than the wage gap. Boys in their dataset got $13.80 a week, on average.

Girls, on the other hand, earned just $6.71 a week, less than half of what the average boy earned.

BusyKid CEO Gregg Murset said that part of the issue is that parents will award kids more for chores that boys typically do.

“There’s a difference when it comes to the types of chores that boys and girls typically do. Let’s say cleaning the bathroom versus mowing the lawn,” he said. “If you’re going to mow a lawn for three hours, that’s a beast, a tough job. Maybe us as parents are giving our girls chores in the house that don’t take two or three hours outside, and there’s a difference in the pay scale.”

“We put this extra pressure on girls, especially the ones who do care work, that money is in opposition to care,” she said. “That would translate to chores as well, that they would be seen as not helping the family. The minute something is monetized for women, it’s seen as not loving and caring and being a team player.”

The app’s dataset shows that boys get about $1.50 more each week in “bonuses” – money not attached to chores.

BusyKid also allows kids to manage their money on the app, and their data shows that boys spend and save more money. Girls, on the other hand, give on average 30% of their allowances to charity, while boys give 10%.

Still, it’s evidence that, in many families, sexism starts early.

They are their son’s dads in Canada. Ireland says his parents are a straight couple.