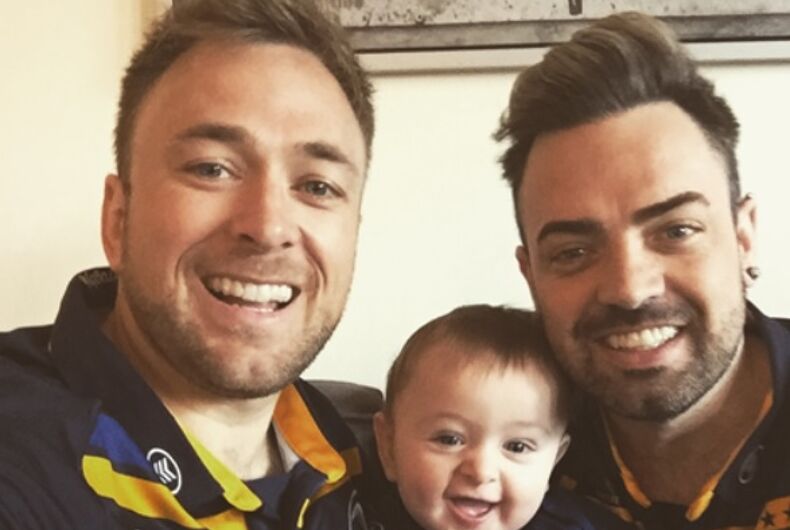 A gay couple from Ireland that was having trouble getting a passport for their son found out that neither of them are considered his father under Irish law.

Jay O’Callaghan and Aaron O’Bryan are married. They are from Ireland and both are permanent residents of Canada.

Their son Jake was born last year in Canada. O’Callaghan and O’Bryan enlisted the help of a surrogate mother and an anonymous egg donor, and they don’t know whose sperm fertilized the egg.

“We never found out who his biological father is, it’s either myself or my husband. We left it to chance. We never really wanted to know, to us both, he’s our son regardless,” O’Callaghan said.

Both of their names appear on Jake’s Canadian birth certificate as his parents. The surrogate mother relinquished all parental rights.

When they applied for their son’s Irish passport, they found out that neither was his father under Irish law.

In Ireland, the person who gives birth to a baby is considered the mother, no matter whether she signed away her parental rights, had any intention to raise a kid, or has a biological connection to the baby.

And her husband is considered the child’s father by default.

“They asked who the biological father was, and I asked why that was relevant,” O’Callaghan said. “They told me it would be relevant under Irish Family Law, and I was shocked to discover that our surrogate and her husband could be considered the legal parents of our son at home, even though neither of them has a biological connection to him.”

The DNA test and the legal cost of applying for guardianship could exceed 10,000 euro (about $11,600), and only one of Jake’s dads would be considered his parent.

“The process of us getting here took years. All I want now is to enjoy my life with my son and my husband.”

“I felt so let down by the country, a country that I love dearly,” O’Callaghan said. “I don’t go home four times a year for no reason, I go back because I love my family and I love the people there. I felt so deflated knowing that this barbaric law as it stands prevents myself and my husband having any legal rights at home.

Boys get more than twice as much as girls in allowance