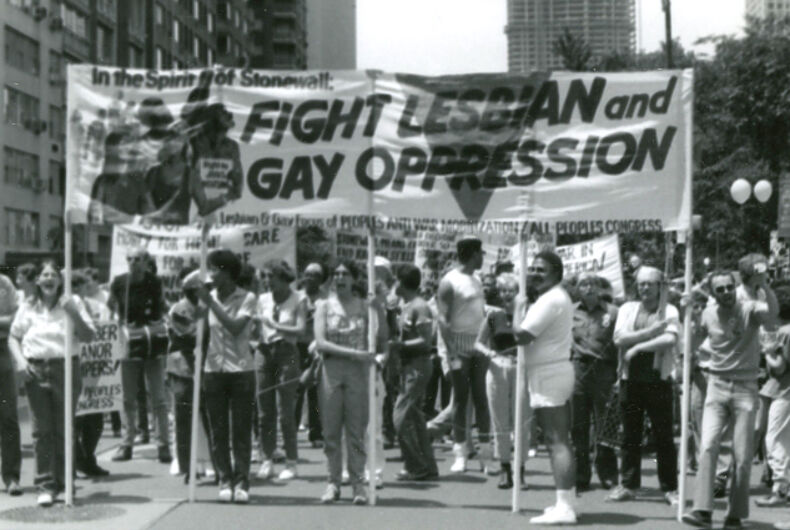 A protest sign from the 1985 New York Pride Parade, in its second year of sponsorship by the organization Heritage of Pride.Photo: National Museum of American History

“In the spirit of Stonewall” — these marchers in 1985’s New York City Pride Parade encouraged us to fight oppression.

It was 16 years after the 1969 riots. But put the photo on the haunting spectrum of HIV and AIDS, and the message carries anger and desperation.

Just four years before, in 1981, the U.S. Centers for Disease Control and Prevention reported a rare lung infection. That July, The New York Times reported 41 cases of Kaposi’s Sarcoma in gay men in New York and California.

By the year of this picture, ravages of the epidemic were bearing down on Americans, and upon gay male Americans in particular.

In 1985, the epidemic’s intensity was only increasing. The Food and Drug Administration licensed the first HIV test, and the Pentagon announced it would test all recruits and reject those with the virus. Congress allocated $70 million in AIDS research, and President Ronald Reagan finally mentioned the disease publicly.

Is Franklin Graham positioning himself to run for President?

What does Ireland’s abortion vote say about the future of politics in the US?