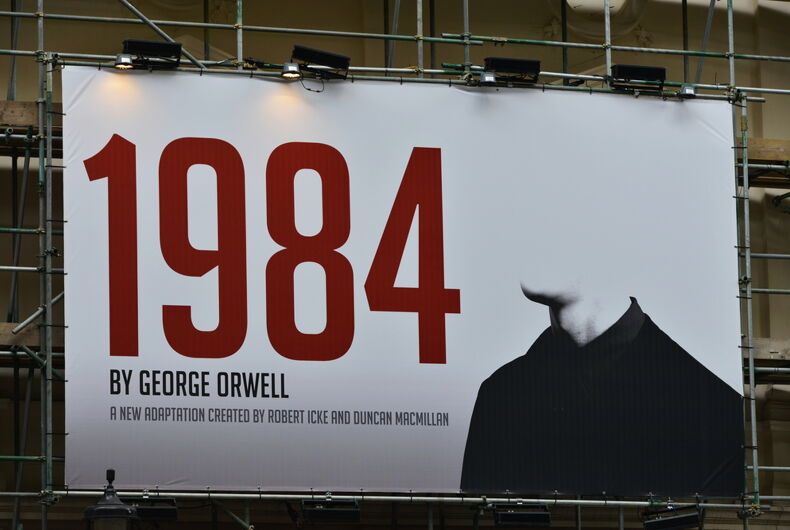 “The horrible thing about the Two Minutes Hate was not that one was obliged to act a part, but that it was impossible to avoid joining in… And yet the rage that one felt was an abstract, undirected emotion which could be switched from one object to another like the flame of a blowlamp.” – The Orwell: 1984

The transgender community in the UK boycotted the event for the most part, leaving American Caitlyn Jenner to debate Transgender Exclusive Radical Feminist scholars.

Anti-transgender audience members were reportedly strategically placed in front of cameras, and encouraged to boo, hiss, and heckle the transgender people on stage.  Screams of “penis!” could be heard, and despite promises to maintain a civil environment by Channel 4, no one was removed.

Meanwhile, across the pond, J.J. McCullough suggested in the conservative National Review that conservatives should compromise on transgender issues in a very limited way.

This proposal acknowledged that transgender people exist, and should be afforded the minimal human dignity of being addressed by preferred name and pronoun (as long as it’s a binary identity), even if they shouldn’t have any legal protections (because that would infringe on everyone else’s religious right to discriminate against transgender people.)

In effect, McCullough was calling for conservatives to tolerate transgender people at the absolute, bare minimum level of that word’s definition, in a sort of “be glad we allow you to breathe” sort of way.

You would have thought that McCullough had suggested repealing the 2ndAmendment given the responses he got from other conservatives for violating conservative orthodoxy.

Two counter editorials appeared immediately in the National Review, and others at The American Conservative and The Federalist. The gist of these articles was that it is a moral imperative to misgender transgender people, deny them legal protection, and to discriminate against them, because transgender people are an existential threat to life the universe and everything.

Michael Dougherty at the National Review responded that acknowledging the existence of transgender people is a “slippery bit of double talk,” and concluded “I’m not going to compromise with this movement, anymore than conservatives should have compromised with the eugenicists and their surgeons.”

Rod Dreher at the American Conservative suggests that discrimination against transgender people is a civic virtue, throws a plug for an anti-transgender feminist website, and describes even the tolerance of transgender people as, “madness, true madness, and you cannot compromise with it.”

He also hints at reparative therapy (voluntary or otherwise) as a solution, stating “It is possible to treat them and their disordered condition humanely…”

David French’s National Review response is perhaps the most illuminating. He acknowledges that lesbians and gays have seen tremendous gains in acceptance, and this is why conservatives need to stomp transgender people out of society now, before it’s too late.

“There has been no ‘compromise’ over homosexuality,” he states. His answer is for conservatives to be as nasty and discriminatory towards transgender people as possible, for their own good of course.

“But treating every single human being with dignity and respect means not just defending their constitutional liberties and showing them basic human kindness, it also means telling the truth — even when the truth is hard.”

The alliance of convenience between right wing groups and TERFs is evidence of the level of irrational hate and fear directed at transgender people.

On one side, you have people who are ostensibly radical feminists, and on the other you have the people leading the charge to create the Republic of Gilead (literally, the national review hosts writers who have called for the government to execute women who have had abortions).

Yet somehow, they have formed an alliance after they’ve both arrived at the bizarre conclusion that transgender people are a greater existential threat than each other.

Yet, their stated goals for transgender people are aligned. One of the original anti-transgender feminist academics, Janice Raymond, wrote in 1979 that, “the problem of transsexualism would best be served by morally mandating it out of existence.”

In the case of the religious right, this was a recent, and deliberate, pivot to create fear and anger directed at transgender people, to create a new bogeyman to replace LGB people.

Sarah Posner at Rolling Stone wrote a long form piece exploring how the religious right deliberately pivoted to a strategy of fear-mongering about transgender people when it became clear in early 2015 that the cultural and legal fight to prevent same-sex marriage was all but lost.

Prior to 2010, the vast majority of right wing efforts against LGBT rights were focused on lesbians and gays.

The media, for its part, is entirely amoral. They are not driven by right and wrong, but simply by ratings and revenue.

If they thought they could make money on a debate whether Jews have a place in society between neo-Nazis and holocaust survivors, they would happily host it. In the process, however, they have helped to throw the Overton Window open even wider.

The 2016 election gave candidate Donald Trump approximately $5 billion dollars of free media coverage. This free media was the result of a self-reinforcing cycle of violating social and political norms generating media hits. It lead to a system of perverse incentives to open the Overton Window wider with actions even further outside of what had heretofore been both unacceptable.

We are witnessing a continuation of this phenomena. People who both passionately and irrationally hate transgender people are given a platform to argue that they should not be tolerated in civil society, and should be actively harassed and discriminated against.

We are treating the viewpoint that a vulnerable minority should be culturally eradicated as no more, or less hateful, than a disagreement whether the Fed should raise the prime rate two or three times this year.

In those moments, nowhere seems safe, because no one else seems to be thinking about the dark places acting on such reckless manufactured hate took our country, and others, in the 20thcentury.

Facebook killed their Pride reaction, but they added this instead