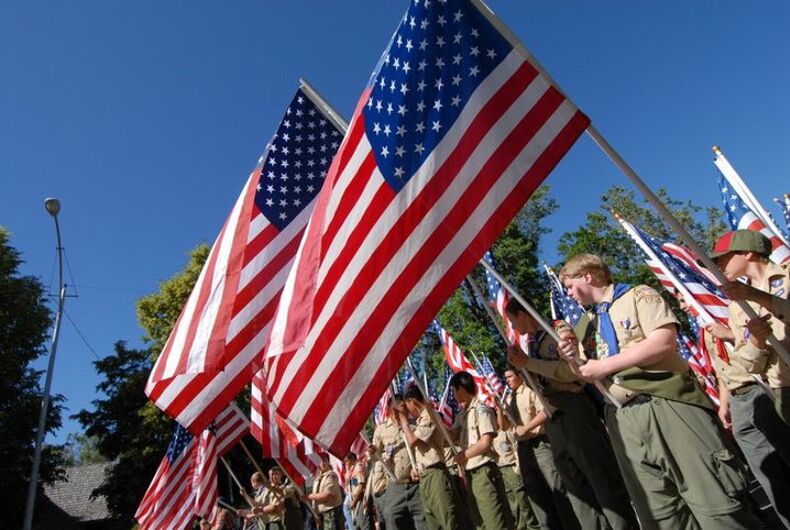 The Boy Scouts are one of many groups that has marched in the parade in the past, as seen in this 2010 photo.Photo: Facebook/Freedom Festival

A compromise has been reached with the organizers of a Fourth of July festival in Utah to allow LGBTQ groups to participate.

The Freedom Festival is a popular event in Provo, and it includes a Fourth of July parade. While privately organized, it will receive almost $300,000 from the city and county governments this year.

But just hours after signing an agreement to get the funding on Wednesday – an agreement that included a nondiscrimination clause that mentioned sexual orientation – the festival’s organizers rejected the five LGBTQ organizations that applied to participate in the parade.

“The parade is a Fourth of July celebration of America, not a special interest-oriented parade,” he said.

“We don’t want this to be an issues parade,” he added. “We don’t mind them being in the parade, but sexual preference is a private matter.”

“I fail to see how the Freedom Festival’s decision to exclude these groups from the parade is consistent with the agreed-upon non discrimination clause and with Provo’s commitment to inclusion,” Councilmember George Handley said in a statement.

Utah County Commissioner Nathan Ivie said at a press conference Thursday that he was baffled by what the festival organizers did.

“After we went through the effort of incorporating the nondiscrimination clause, to be quite blunt, I didn’t think somebody would be stupid enough to do what they did,” he said. “The reality is, you guys belong in this community. You are part of this. We love you.”

Ivie shouldn’t be surprised, though. Last year, the Freedom Festival rejected an LGBTQ youth center for being an “advocacy group.”

Ivie said he considered the ban on LGBTQ organizations a “breach of the contract Utah County has with the Freedom Festival” and that he was looking at pulling the county’s funding from the festival.

Yesterday afternoon, a compromise was reached. Warner announced in an email that all five LGBTQ organizations would be allowed a single entry in the parade and a single float.

Kendall Wilcox of Mormons Building Bridges, one of the five rejected groups, said that a meeting with Warner yesterday was “very intense,” but that he was happy with the outcome.

He said the LGBTQ float will say “Utah’s LGBT community celebrates America” as part of the parade’s theme “United We Stand.”

“The float itself will represent a good-faith effort on all parts to stand unified,” Wilcox said.

The Freedom Festival offered to fund the LGBTQ float, which will be constructed by veterans. PFLAG and Provo Pride will also march with a quilt representing family diversity, and they agreed make more patriotic.

After the compromise was announced, Ivie said that “the bigger story” is people finding common ground.

“I also think it’s a reflection of what can happen when two opposing sides are willing to sit down and work out differences,” he said.

Sessions cited the Bible to defend stealing children, but he omitted a key verse