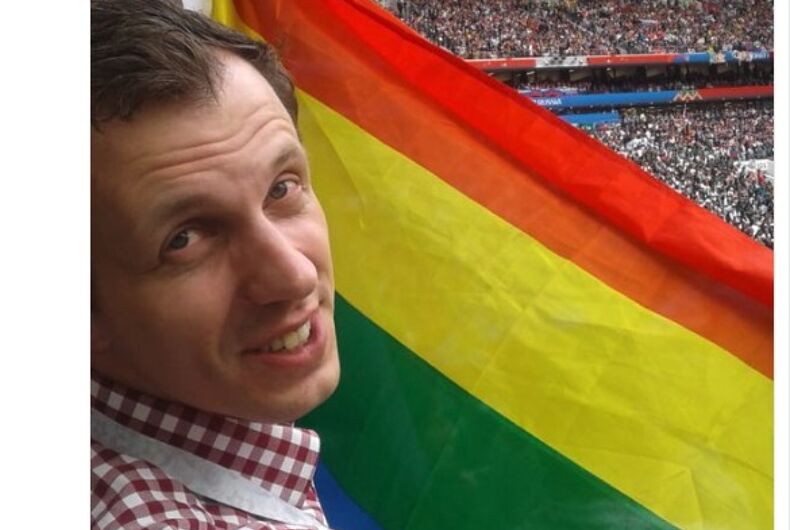 Budweiser’s marketing team is learning a valuable lesson during Pride month. The beer company is a sponsor of this weekend’s NYC Pride, but it’s also a sponsor of the ongoing World Cup being hosted in Russia.

While the corporation is celebrating pride with Americans, it’s also shoveling money into Russian pockets where it will be used to further the country’s anti-LGBTQ laws and pogroms.

LGBTQ and human rights activists sounded the alarm when Russia was chosen to host the 2018 World Cup, but the government agreed not to prosecute LGBTQ fans who showed affection for each other or waved a rainbow flag. “Gay propaganda” is illegal in the country.

But just since the games started, a gay couple has been attacked and so severely beaten it caused brain injuries. A British activist was arrested for protesting Russia’s anti-gay laws and a “diversity house” for queer people and ethnic minorities was abruptly shut down.

The group Voices4 is making sure that the beer company’s hypocrisy isn’t lost in the marketing. The activist collective has started a digital protest aimed at Bud’s Instagram account and celebrities are starting to endorse it.

Voices4 spokesperson Elly Brinkley tells LGBTQNation, “Including the LGBTQIA+ community in their advertising does not erase their craven decision to financially support a dangerous, homophobic regime. The Budweiser brand can’t have it both ways, sponsoring our pride here in the United States and bolstering the economy of a country that openly persecutes us. It’s up to Bud to choose pride over genocide.”

The group is asking participants to comment on Budweiser’s Instagram account where the company is busily promoting their Pride and World Cup sponsorships using the hashtag #PrideOverGenocide.

“At Voices4, we believe that queer people anywhere are responsible for queer people everywhere. Budweiser needs to clearly speak out against Russia’s anti LGBTQ laws and culutre and ensure queer people and their safety is a priority for FIFA moving forward.”

PLEASE GO TO THE @Budweiser Instagram account and comment the hashtag #PrideOverGenocide. Budweiser wants to sponsor the World Cup in Russia and Pride in the US at the same time. We say no — Budweiser, you have to choose: celebrate our Pride or support our Genocide. Since the games opened four days ago, a gay couple was publicly beaten resulting in brain injury. The safe space or “diversity house” for queer people and ethnic minorities was abruptly shut down, and British activist Peter Tatchell was arrested for protesting LGBTQIA+ abuses outside the Kremlin. You can’t have it both ways, Bud. Video by @sam.vp !

LGBTQ Nation reached out to Budweiser for comment, but didn’t receive an answer by press time.

This guy started attacking people on a bus. A gay Army veteran stopped him.