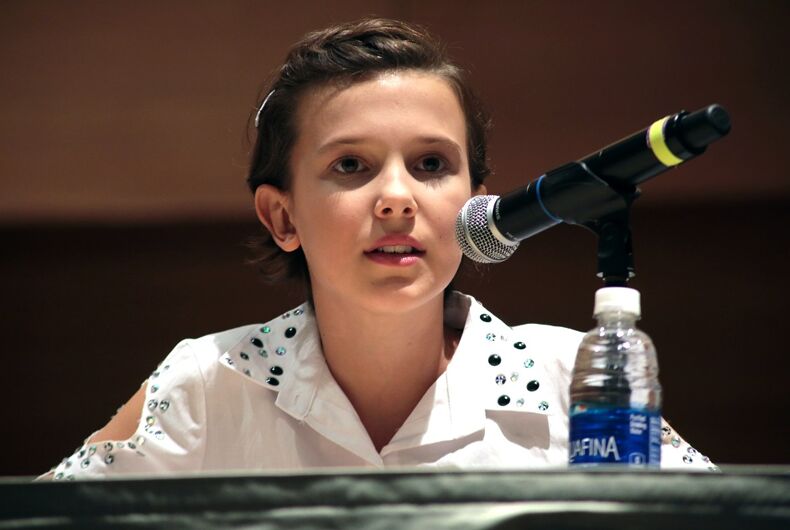 Millie Bobby Brown, who plays El on Netflix’s Stranger Things, has quit Twitter after she became the target of homophobic memes.

Bizarrely, the tweets are not directing anti-gay slurs at the 14-year-old actress. Instead, they’re falsely accusing her of violent homophobia.

The memes started with a few that said the child actress ran over gay people at Pride and was happy about it. Some Twitter users believe this was meant to be absurd – Brown is too young to even drive and has no history of anti-LGBTQ comments.

wtf i was just checking my snapchats and i got this one from millie bobby brown i’m literally shaking idk what to do….. pic.twitter.com/aw1vQf502f

They also put the word “faggot” in her mouth.

And some of the memes are just racist and homophobic.

Millie bobby Brown when a gay fan asks to take a picture with her pic.twitter.com/eEVz8KjIU5

Millie Bobby Brown pretending to be a man on Grindr so she can lure gays into her torture basement https://t.co/4NoBjJKsDF

pretending millie bobby brown, a literal child, is a violent homophobe for memes is fucking disgusting and not funny at all. You are grown adults, editing photos of her with captions that include the f slur, violence against lgbt community for comedy and it’s fucking gross.

Several Twitter users trying to explain the origin of the memes used this screencap of tweets in which someone accuses Brown of being Islamophobic. How that turned into the “faggot” memes, though, doesn’t seem to be something anyone can explain.

it started from this pic.twitter.com/nBKRfEYski

One queer Twitter users believe that they became popular because they allowed straight people to use the word “faggot” public.

As a reminder, someone posted about how the 14-year-old is actually pretty supportive of LGBTQ equality.