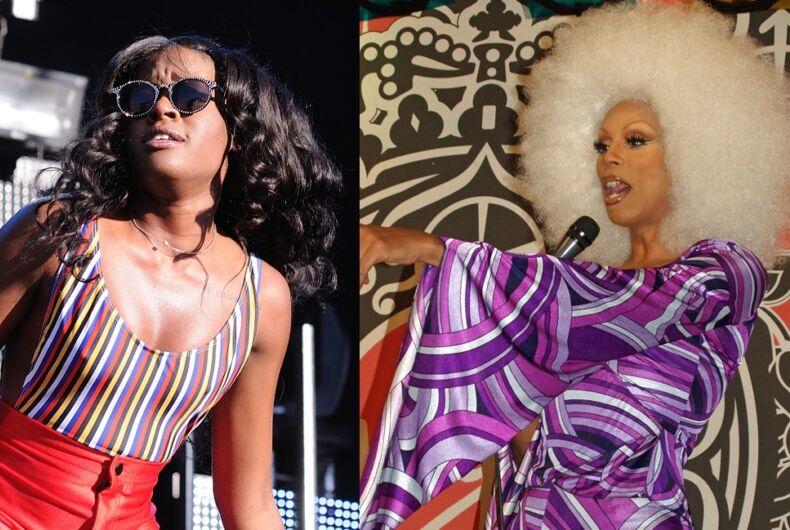 Bi hip hop artist Azealia Banks said that she got RuPaul’s album American removed from Spotify for ripping off her music, and that she’s trying to get it taken off iTunes.

At issue is the song “Call Me Mother,” which appeared on American. Banks said that it uses an unauthorized sample from her 2016 single “The Big Big Beat.”

Banks said that RuPaul is trying to reach out to her now that the album was removed. She responded by calling RuPaul’s Drag Race a “campy ass show.”

She then accused RuPaul of buying into “popular white gay sentiment.”

American was released in March, 2017. When it was released, some fans have noticed the similarity between “The Big Big Beat” and “Call Me Mother.”

The liner notes for American do not credit or mention Banks.

Even though American is not currently available on Spotify, that does not necessarily mean that RuPaul plagiarized Banks. Songs can be similar without one artist violating copyright law, and Billboard reports that Spotify’s policy is to remove songs while they are under investigation.

“Call Me Mother” was used in season 3 of RuPaul’s Drag Race: All Stars. In the Divas Live challenge, contestant Ben de la Creme lip synced to the song as it was performed by a Julie Andrews impersonator.

Banks is not new to controversy. In 2016, she endorsed Donald Trump, saying, “Trying to be all PC… is not good for culture.”

She has also called multiple people – both online and in real life – “faggot,” and promised two years ago to stop using that slur.

Banks said that she loves gay men this past weekend.

RuPaul has not commented on the controversy.

Pride in Pictures 1987: The AIDS Memorial Quilt goes on display