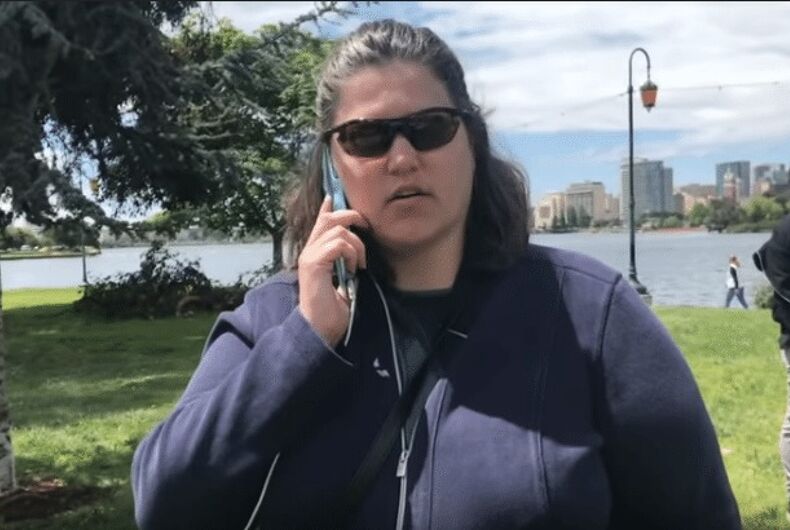 This woman called the police because a black family was barbecuing in a public park.Photo: screenshot

It seems hardly a day goes by without white people calling or threatening to call the authorities on people of color for the crime of making them “uncomfortable.”

Here are the latest additions to the list of things you can’t do while black/brown or any other color, without some easily-alarmed white people reaching for their phones.

This week, Midtown Manhattan lawyer Aaron Schlossberg achieved internet fame when a video of him verbally assaulting and threatening to call ICE employees at a Midtown deli for speaking Spanish to Spanish-speaking customers went viral.

Who this this bigot in Midtown Manhattan? What's his name?

Here he is harassing & insulting two women for speaking Spanish…TO EACH OTHER in the middle of Manhattan.

The bigot’s landlord has now ejected him from his office space and he’s been forced to take down his social media accounts after the backlash.

Stanford University faculty member Jennifer Schulte achieved internet fame when she called the police on two black couples barbecuing in an Oakland, California park. The police eventually arrived and told her the black couples weren’t doing anything wrong. A video of Schulte calling the cops went viral and got over 1 million views.

Oakland residents responded holding a massive party at the location of the cookout in question.

How Black Oakland responds to a white lady calling the cops on Black folks BBQing… pic.twitter.com/kRdJpnmXQ2

Donald Sherman was taking his baby Caleb for a walk in a Washington, DC park when he noticed a white woman on a bike “who veered off as Caleb and I were walking in her direction.” A few minutes later a security officer flagged Sherman down and told him someone complained that there was a “suspicious man” walking on the bike path with a baby.

Because nothing says “danger” like a man pushing a stroller.

When former Obama White House staffer Darren Martin moved into his New York City apartment, his new neighbors spotted him and reported a robbery. Martin was allowed to leave after police conducted a 10 to a 15-minute investigation.

I was happy to move back to NYC and into my new apt in the UWS, near Harlem. The plan was to do this today in daylight, recording all the pomp that comes along with such a move. Well, life and work happens and you end up having to move on a Friday night at 11pm, and unexpectedly, pic.twitter.com/D16sHCEI7i

Donisha Prendergast, filmmaker and granddaughter of Bob Marley, was checking out of her Rialto, California Airbnb rental with friends, were surrounded a neighbor called the police to report a robbery. The neighbor became suspicious because Prendergrast and friends did not wave at her when she greeted them.

STORY TIME: During our time in Cali we have been staying at an Airbnb. The 30th was our second morning and at about 11am we checked out. The four of us packed our bags, locked up the house and left. As you can see 3 of us were Black. About 10 seconds later we were surrounded by 7 cop cars. The officers came out of their cars demanding us to put our hands in the air. They informed us that there was also a helicopter tracking us. They locked down the neighborhood and had us standing in the street. Why? A neighbour across the street saw 3 black people packing luggage into their car and assumed we were stealing from the house. She then called the police. At first we joked about the misunderstanding and took photos and videos along the way. About 20 minutes into this misunderstanding it escalated almost instantly. Their Sergeant arrived… he explained they didn’t know what Airbnb was. He insisted that we were lying about it and said we had to prove it. We showed them the booking confirmations and phoned the landlord… because they didn’t know what she looked like on the other end to confirm it was her.. they detained us – because they were investigating a felony charge – for 45 minutes while they figured it out. We have been dealing with different emotions and you want to laugh about this but it’s not funny. The trauma is real. I've been angry, fustrated and sad. I was later detained at the airport. This is insanity.The cops admit that the woman’s reason for calling the police was because we didn’t WAVE to her as she looked at us putting our luggage into our car from her lawn. #wedidntwave #arighttoberight #racialprofiling privilege #rightourstories #therevolution #whenyoupulloverfilmmakers @[email protected] @komiolaf @ahutchphoto Nisha Rebel Ashlee Hutchinson

Posted by Kells Fyffe-Marshall on Tuesday, May 1, 2018

Walking your dog while Black

Washington, DC attorney Riley Temple was walking his dog on his own street when a white man bellowed at him and asked if he lived in the neighborhood. The man called the police to complain that Temple was “trespassing.”

Teenager Simone Intrepid Gamble was trying on a dress in a Tacoma, Washington department store when her shopping trip was interrupted by a manager’s public announcement about the store’s theft policy. The manager then called security on Gamble and her friends.

Mekhi Lee, Eric Rogers II, and Dirone Taylor were shopping for prom clothes at a Nordstrom Rack in Brentwood, Missouri, when staff followed them around the store and later told police — falsely — that the young men had shoplifted.

Police surrounded them when they left the store. They had been accused of theft.

They, of course, stole nothing. They were just Black and in @Nordstrom. https://t.co/DWNqTfUNxt

This incident doesn’t involve the police, but officials at the University of Florida dragged black graduates off stage for dancing in celebration of their achievement. It appeared black graduates were treated more aggressively than their white fellow graduates.

Video from graduation ceremony at the University of Florida shows a lecturer aggressively yanking several minority students off the stage. pic.twitter.com/PJhRcTC24T

Amber Phillips, host of the podcast “The Black Joy Mixtape,” was flying to Washington, DC when the white female passenger next to her complained that Phillips’ arm was touching hers. Phillips began recording her seatmate’s harassment. Upon landing, the white passenger complained that Phillips “assaulted” her, and Metropolitan Washington Airports Authority officers were summoned.

When I decided to take a picture & video to document the incident, I deplaned, picked up my bag, and boarded the shuttle. While I'm on the shuttle, this woman LIED that I assaulted her and the @AmericanAir flight attendant called the cops to remove me from the shuttle bus. pic.twitter.com/czMyxkQVQ7

Yale graduate student Lolade Siyonbola was napping in her dormitory’s common area when white student Sarah Braasch told her she was not allowed to sleep there and called the police. Siyonbola was questioned by police for 15 minutes, and used her key to open the door to her room, but police doubted she was supposed to be there and asked to see her ID.

Siyonbola responded, “I deserve to be here; I paid tuition like everybody else; I am not going to justify my existence here.”

Part 2 – Sarah Braasch, Philosophy PhD student, called the cops on my friend a few months ago for getting lost in my building. Today she messed—again—with the wrong one.

A group of five black women were golfing at Grandview Country Club when the owners of the and a security guard approached to tell them they were playing to slow and the police would be called if they did not leave.

All of these incidents ended relatively peacefully. No one was killed or subject to violence. But that’s beside the point. Police are more likely to use force where black people are involved. Increasing encounters with police for black people increases the likelihood those encounters will turn violent — even deadly.

As Sherman points out, calling the police on black people can put them in danger.

Sherman wrote in a Facebook post, “If this complaint had been made to a different security officer or an actual cop, things could have gone very differently. This is exactly why we have to talk about white privilege and why black lives matter. Because at any point doing anything anywhere my safety and my child’s safety could have been in jeopardy because of some well-intentioned complaint.”

Perhaps fines or some other consequence for calling the police on black people who aren’t doing anything wrong would help people learn to consider that black lives matter more than white comfort.

If marriage equality was overturned, would states be able to enforce old bans?