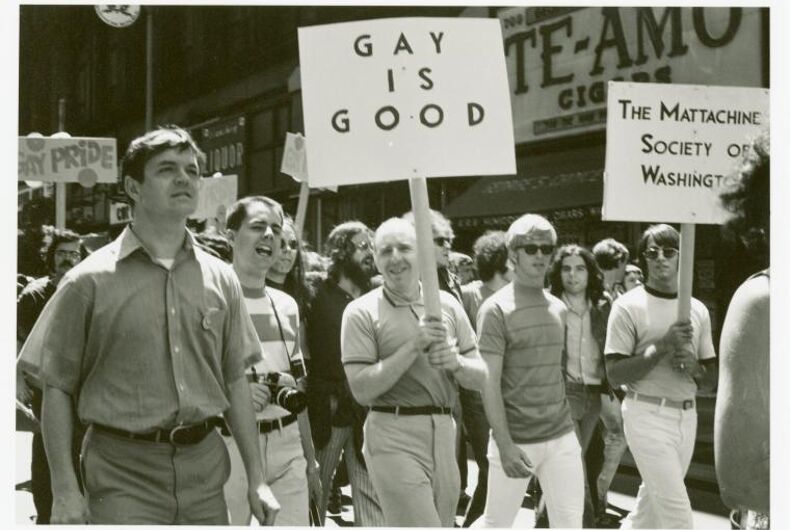 Welcome to LGBTQ Nation’s 49 Days of Pride in Pictures, commemorating our community’s progress since the first Pride in New York City, circa 1970, one year after the Stonewall riots. Check back daily for updates throughout Pride season.

Through today’s lens, the slogan may seem simple — “Gay is Good.”

But in 1970, “Gay is Good” was a radical concept in a world that deemed homosexuality a mental illness.

Gay-rights pioneer Frank Kameny, of Washington, D.C., carried the sign with his now-famous slogan at the 1970 Christopher Street Gay Liberation Day, in New York City. “Gay is Good” was his adaptation of another protest theme of the era, “Black is Beautiful.”

Kameny had been fighting for our rights from the day he was fired as a U.S. Army astronomer, in 1957.

So had Barbara Gittings. She, Kameny and a few brave souls had picketed the White House, as well as Philadelphia’s Independence Hall from 1964 to 1969, known as the Annual Reminders.

These protesters prepared the groundwork for Pride. Kameny founded Washington, D.C.’s chapter of the Mattachine Society, founded by Harry Hay in Los Angeles in 1950 as one of the first gay-rights organizations in the United States. Gittings was New York chapter president of the Daughters of Bilitis, the first lesbian civil-rights organization, founded in 1955 as a social club by Del Martin and Phyllis Lyon, in San Francisco.

In New York City, after Stonewall, members of the Gay Liberation Front and Gay Activists Alliance rallied disparate groups into a 1970 commemoration. Bisexual activist Brenda Howard, for her work in organizing the 1970 rally and march, came to be known as the Mother of Pride.

From many people, with many perspectives, came the Pride that we know today.