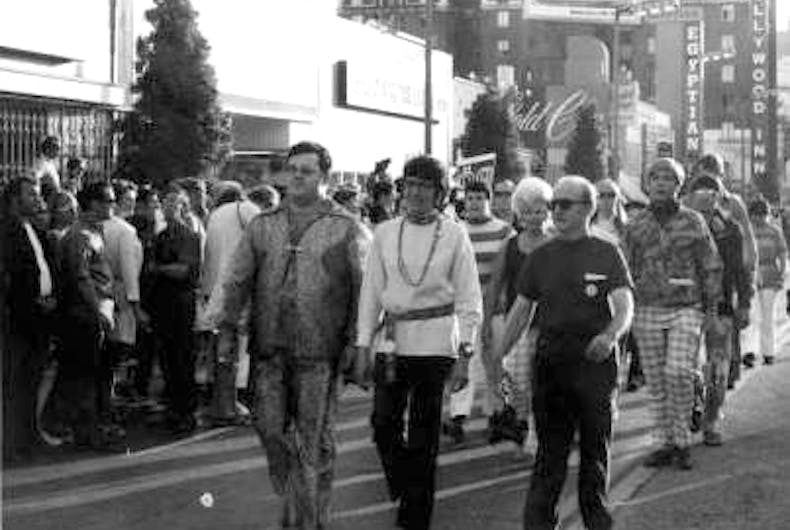 Marchers at Hollywood Boulevard and North Los Palmas Avenue, in the first Christopher Street West Pride parade, Los Angeles, 1970. The photographer, Pat Rocco, an activist and filmmaker, produced gay erotica in the 1960s and films into the 1970s.Photo: Pat Rocco / ONE Archives Foundation

Gay sex was still illegal in California in 1970. That year, Los Angeles commemorated the Stonewall riots with its first Pride parade.

But LGBTQ people had been organizing for some time in Los Angeles, even before the 1969 Stonewall riots in New York City.

In 1948 LA activist Harry Hay had founded the Mattachine Society, a leading organization in the homophile movement after Hay had been expelled as a member of the American Communist Party. The Red Scare, and with it, the Lavender Scare, had targeted gay Americans, and Mattachine established itself as the gay organization that evolved just as the gay-rights movement evolved.

Gays had long been the targets of police brutality in LA. Even before the 1969 Stonewall riots, LA gays and lesbians had protested the New Year’s Day 1967 arrests at LA’s Black Cat Tavern, on Sunset Boulevard.

By 1970, the Christopher Street West Association organized the first Pride in response to Stonewall. In 1973, it skipped a year due to some infighting, but ever since, LA Pride has thrived.

It now draws thousands of revelers.