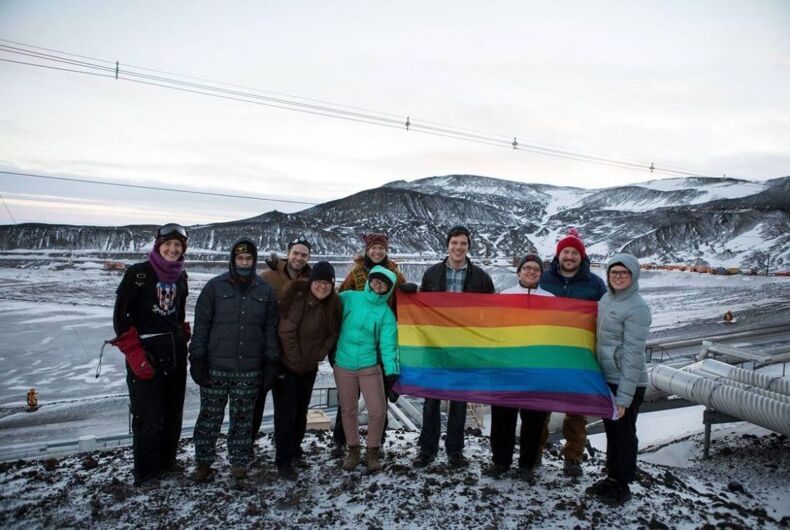 Pride is being celebrated on Antarctica. The event, to be celebrated in June will mark the first time Pride has been celebrated on the remote southern continent. The event was honored with a photo taken this April because it will be dark at the station from May to August.

The remote site houses as many as 900 employees, although just 133 are there for the Antarctic winter, which runs from March to September. Ten identify as LGBT.

The community at McMurdo Station opted to begin celebrating early, taking a historic photo standing in the rugged wilderness, holding a pride flag. It was roughly -14° as they took the photo, but their spirits were not diminished, given the broad smiles present.

With a community that small, the majority of them are in contact on a day-to-day basis, and many other LGBTQ-specific events crop up during the year. This time, however, they’ve opted to do a pride event for June, potentially including a “gay bar night” and movie night, as well as a small parade around the main building.

They have joked about marching on behalf of gay penguins, and taking on faux sponsors such as the station’s one store.

At the remote site, it is difficult for members of the LGBT community to remain connected to queer culture at large. Wireless connectivity is not available for much of the year, and not a great amount of bandwidth is available.

This means there’s little chance of checking out the scene on Grindr or catching up with your favorite queer centric programming.

What’s more, the station is in very close quarters. During winter months, the entire staff lives in one of three structures. Also, the ten hours a day, six days a week work schedules of those at the station leave little time for social activities as it is.

The initial flag photo was the brainchild of Evan Townsend, a steward on the site. They wanted to show that even in as remote a place as Antarctica, you can find community.

“Why not take this photo and let people see that there’s queer representation — even at the end of the earth,” Townsend told NewNowNext.

Pride in Pictures 1978: Dykes on Bikes take charge of the parade