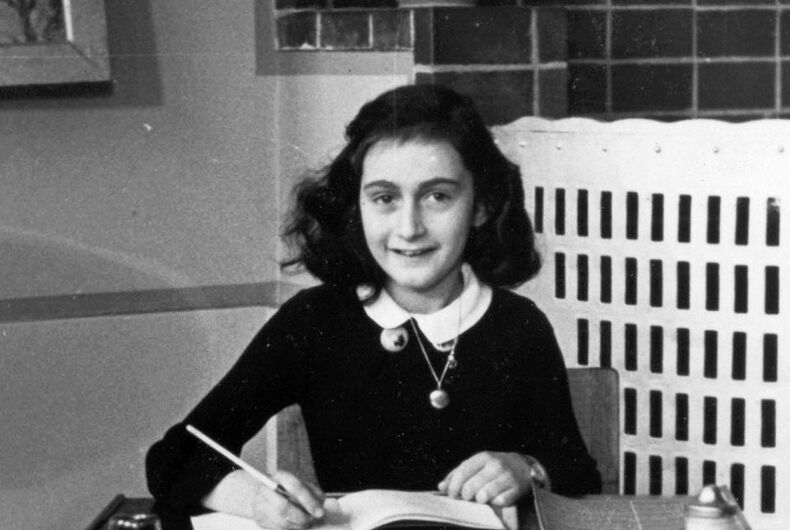 The Anne Frank House in Amsterdam announced the discovery of two new pages to Anne Frank’s diary. Those pages include a possible reference to a gay uncle.

The museum that houses the original, hand-written manuscripts that became The Diary of a Young Girl decided in 2016 to examine what was under two pages that were covered with “brown gummed paper.”

Using image-processing software, researchers were able to decipher what Frank had written. The passages include a few sexual jokes that Frank had heard, some teen writing about sexuality, and a passage that implies that her uncle was gay.

“All men, if they are normal, go with women, women like that accost them on the street and then they go together,” she wrote. “In Paris they have big houses for that. Papa has been there. Uncle Walter is not normal. Girls sell this.”

Frank is one of the best known Jewish victims of the Holocaust. During World War II, she and her family spent two years in hiding in Amsterdam when she was in her early teens before being found by the Nazis and sent to a concentration camp.

After the war, her father succeeded in getting an edited version of her diary published, which has since become one of the most read books in the world and one of the first accounts of the Holocaust many Americans read.

In order to get the book published, Frank’s father edited several passages about sexuality out of the book, but they were eventually published in the Definitive Edition of the diary in 1991. Those “new” passages showed that the young Anne Frank described going through puberty and her relationship with her mother with candor.

The passages that were just discovered, though, were not included in the Definitive Edition because they were covered by brown paper.

In 2016, during a check on the condition of the diaries, the museum decided to examine “two whole pages [that were] covered up with brown gummed paper.”

After the paper was removed, researchers “photographed the pages, back-lit by a flash, and then used image-processing software to decipher the words, which were hard to read because they were jumbled up with the writing on the reverse sides of the pages,” the museum said.

Frank wrote a few dirty jokes on the pages too.

“A man had a very ugly wife and he didn’t want to have relations with her,” she wrote. “One evening he came home and then he saw his friend in bed with his wife, then the man said: He gets to and I have to!!!!!”

Another joke she had heard: “Do you know why the German Wehrmacht girls are in Holland? As mattresses for the soldiers.”

“The ‘dirty’ jokes are classics among growing children,” Frank van Vree, director of the National Institute for War Documentation. “They make it clear that Anne, with all her gifts, was above all also an ordinary girl.”

Rapper Cardi B comes out as bisexual