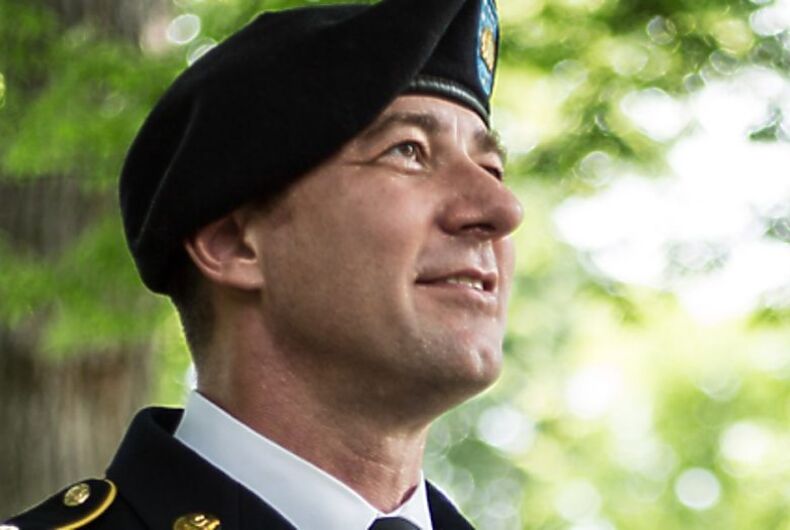 Two organizations have filed a lawsuit against the Pentagon on behalf of two service members who faced discrimination because of their HIV status.

Sergeant Nick Harrison is a lawyer, a U.S. Army veteran who was deployed twice, and a member of the D.C. National Guard. In 2012, while deployed to Kuwait, he was diagnosed with HIV.

In 2013, he was offered a commission with the JAG Corps of the D.C. National Guard, but he was denied a medical waiver and lost his multiple appeals.

“It’s frustrating to be turned away by the country I have served since I was 23 years old, especially because my HIV has no effect on my service,” Harrison said. “It was an honor to be chosen to join the JAG Corps for the D.C. National Guard, and I look forward to my first day on the job.”

Current Pentagon policy is that people living with HIV cannot be deployed, which means that they can’t enlist or be appointed as officers in the military.

“People look at my medical records and they see, ‘Oh, he’s perfectly physically and medically fit,’” Harrison said. “But, I’ve got this ‘You can’t be deployed, you can’t go anywhere’ that blocks me from advancing, blocks me from commissioning and so forth.”

Earlier this year, the Trump Administration unveiled a new “deploy or get out” policy, which aims to remove service members who cannot be deployed worldwide. The policy would affect people with HIV.

The lawsuit, which was filed in Virginia by Lambda Legal and Outserve-SLDN, says that the military’s policy violated Voe and Harrison’s Fifth Amendment equal protection rights.

“These oppressive restrictions are based on antiquated science that reinforces stigma and denies perfectly qualified service members the full ability to serve their country,” said Scott Schoettes of Lambda Legal.

Harrison said that he hopes the military will change its policy.

“I’m still very optimistic. I think that this lawsuit is definitely a move in the right direction, and I hope that the military will respond by updating their policies and by making the changes that are necessary.”