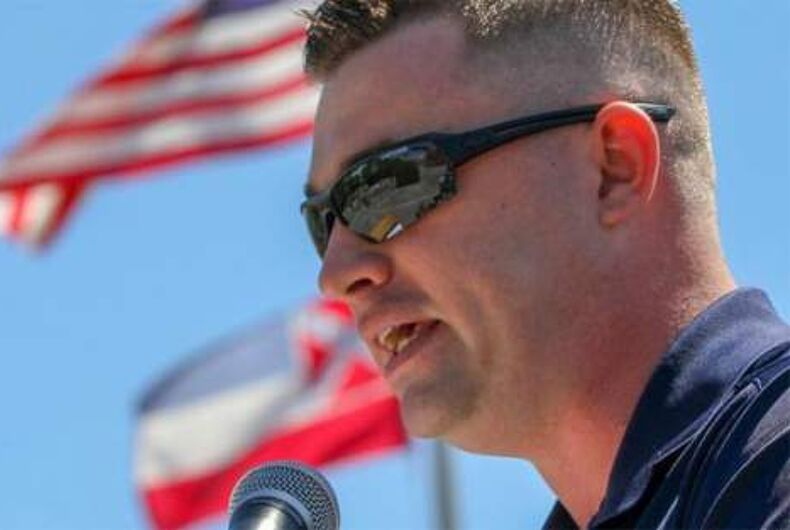 Michael Aycox isn’t your run-of-the-mill candidate for Congress. He’s the first openly gay candidate to run for Congress in Mississippi.

Aycox’s candidacy would be news anywhere. But in a state as conservative as Mississippi, it’s bound to make headlines. It might even become the whole basis of the media focus on his campaign.

Perhaps that why the Navy veteran and police officer seems to want to put the focus anywhere else.

”This is me,” he recently told the Clarion-Ledger. It’s not who I am, it doesn’t define me, it’s just a part of me. It’s like having brown hair; it doesn’t change who I am … I didn’t do this to be the voice of the LGBT community.”

Aycox is running to replace Republican Gregg Harper, who announced his retirement in January, as representative of Mississippi’s third congressional district.

Aycox, 30, lives in Newton, Mississippi with his husband Mario, and works as an investigator for the Newton police department.

So, can Aycox win, in a relatively solid Republican state with only one Democrat in its entire congressional delegation?

There are currently six Republicans vying to replace Harper. Meanwhile, only one other Democrat — state representative Michael Evans — has entered the race.

Evans distinguishes himself from Aycox with his anti-LGBTQ positions. Evans opposes marriage equality and voted for a bill to allow businesses to deny services to people based on religious beliefs.

In a state where even Democrats are compelled to take anti-LGBTQ positions to have a hope of political viability, it seems unlikely that Aycox will get past the primary, and even less likely that he’ll win the general election if he makes it that far.

But maybe that’s beside the point. ”I did this to make a difference,” Aycox says. Running for office as an out gay man in Mississippi, Aycox has already accomplished that goal.

Is Congress about to protect trans people in the military despite Trump’s objections?