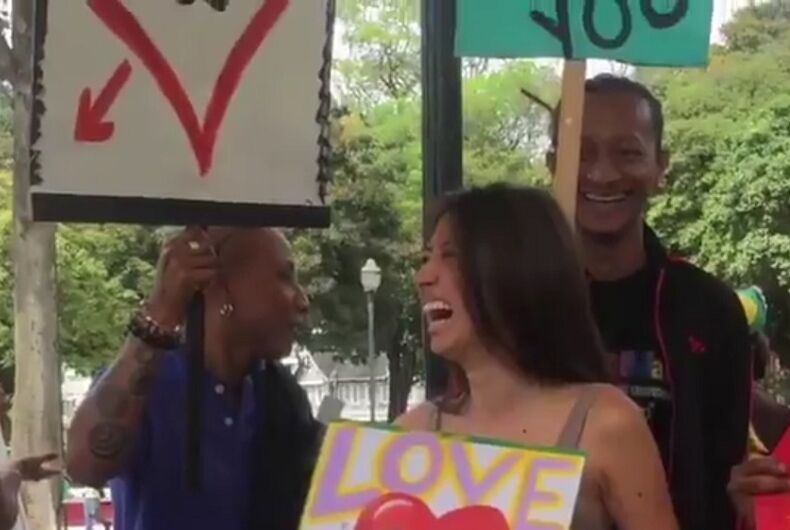 The High Court of Trinidad and Tobago just struck down the country’s law criminalizing sodomy.

Love won! Judge finds buggery and serious indecency unconstitutional as applied to adult consensual acts. Judge finds laws not saved and not reasonably justified. Says Section 4 can prosecute sexual assault. Judgment and what happens to the laws finalised in July.

Judge Devindra Rampersand ruled yesterday that Sections 13 and 16 of the Sexual Offenses Act are “irrational and illegal” because they violate the rights to privacy and freedom of expression.

The lawsuit was brought by LGBT activist Jason Jones. “What I think the judge pointed out was ‘here every creed and race find an equal place,’ and I think we must all come together now and embrace each other in true love and respect,” Jones said.

“This is not about LGBT, this is about the rights and freedoms enshrined in our Constitution, and I hope that everyone walks away from this calmly and collectively.”

LGBT activists cheered when the decision was announced and started chanting “Love is love.”

Jamaican activists cheered them on.

A successful challenge has been mounted against Trinidad and Tobago’s Buggery Law.

This is a monumental moment for Caribbean LGBT+ rights history.

Way to go T&T, WE love it when #LoveWins 🇹🇹 🏳️‍🌈 pic.twitter.com/FSVb943ZTR

Conservatives had argued against overturning the laws, saying that legalizing sodomy would somehow violate their religious beliefs. The judge said the ruling “is not an assessment or denial of the religious beliefs of anyone.”

In 2016, Prime Minister Keith Rowley said that the law should protect everyone, “regardless of whom they sleep with.” But since then, he has not advanced legislation to repeal the sodomy ban.

The law will remain in place until a hearing in July to decide whether it can be modified or if it has to be removed entirely.

Kenita Placide of OutRight Action International said that the momentum in the Caribbean and Central America is on the side of LGBT rights.

“With positive rulings in Belize and Trinidad and Tobago, the movement will carry the momentum to other parts of the region,” she said in a statement.

Take a deep breath. John Boehner has a new gig selling weed & it may be good for LGBT people.

Democrats are pushing back on the trans military ban. Will the military defend it?