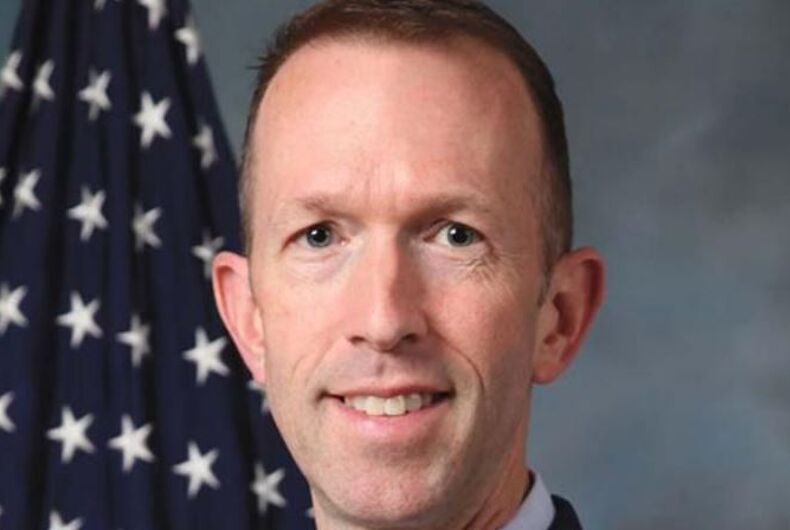 The Air Force lifted the penalties it imposed on an officer who claimed that his “sincerely held religious beliefs” prevented him from signing retirement documents for a gay subordinate.

This decision was announced by Donald Trump’s Air Force Secretary Heather Wilson in a letter that argued that his “sincerely held religious beliefs” meant that his discrimination did not break the law.

The case involves Col. Leland Bohannon, who was removed from command and consideration for promotion when he refused to sign a certificate of spousal appreciation for a gay subordinate who was retiring, which is not required by law but is a common way to recognize the sacrifices military spouses make.

This is a paper that Bohannon has signed for every straight subordinate who has retired, but he said that signing it for a gay person would be the equivalent of “endorsing” marriage between two people of the same sex.

So Bohannon complained to a superior officer, who volunteered to sign it for him. When the gay subordinate found out what happened, he filed an Equal Opportunity complaint.

The Air Force investigated and found that Bohannon had discriminated on the basis of sexual orientation, which was prohibited by an Obama Administration policy.

Bohannon appealed the decision with help from the conservative Christian organization First Liberty, which is also involved in a case involving an Oregon baker who wants a religious exemption to discriminate against LGBT people.

Earlier this week, Air Force Secretary Heather Wilson announced in a letter to Representative Vicky Hartzler that the penalty had been lifted and Bohannon’s record was “corrected” in light of his “right to exercise his sincerely held religious beliefs.”

“The Air Force has a duty to treat people fairly and without discrimination on the basis of race, color, sex, national origin, or sexual orientation and met that duty by having a more senior officer sign the certificate,” Wilson wrote.

Wilson was a Republican member of Congress from 1998 to 2009 from New Mexico before she was chosen by Donald Trump as Air Force Secretary in 2017.

At the time, the Palm Center opposed her nomination because of her long record of opposing LGBT rights, saying they weren’t sure that “she is the right person to foster a climate of professionalism and respect for all service members, including LGBT troops and women.”

“As a senate candidate, Rep. Wilson opposed a bill intended to reduce anti-LGBT bullying, saying that victims should simply be stronger and more ‘comfortable with themselves’ instead of expecting perpetrators to be held accountable,” the Palm Center’s director Aaron Belkin wrote in a statement.

While Wilson’s letter says that the decision was made by the Director of the Air Force Review Boards Agency, it’s pretty unusual for the Secretary of the Air Force to take such an interest in a personnel matter.

Also, Wilson clearly agrees that Bohannon deserved a religious exemption to allow him to treat subordinates differently based on their sexual orientation. Her letter could stop future investigations into discrimination if the Air Force believes that “sincerely held religious beliefs” are a justification for anti-LGBT discrimination.

“Personal religious beliefs should never be used as an excuse to discriminate against a subordinate,” said Ashley Broadway-Mack, the president of the American Military Partners Association, in a statement. “This colonel’s action sent a dangerous message to the entire command that he disapproves of every same-sex spouse that supports their service member throughout their military career. That’s a severe failure of leadership.”