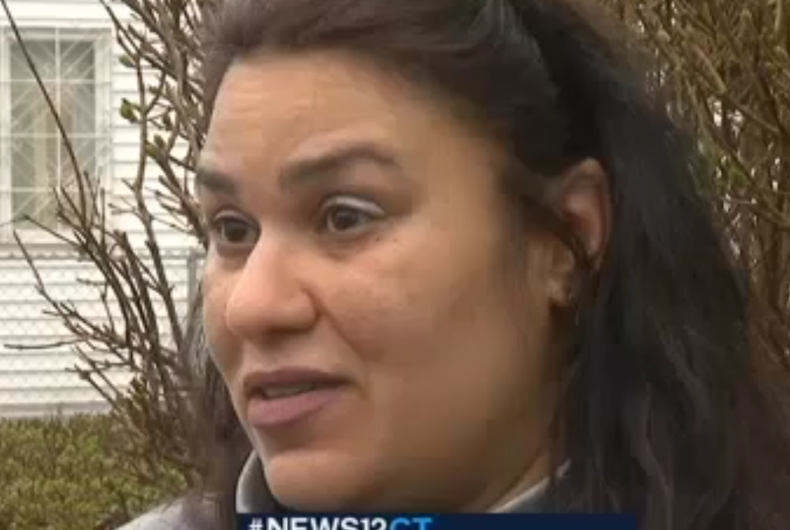 Alexandra Molina was the victim's friend. She said she didn't know of anyone who had a problem with the victim.Photo: Screenshot/News 12

A transgender woman was shot yesterday afternoon in Connecticut.

The woman, whose identity has not yet been released, was shot yesterday afternoon in her own apartment in Bridgeport. She was shot several times and at least once in the face.

Witnesses say the victim stumbled out to the street before being taken to the hospital. She is currently in stable condition and was left with a broken jaw.

“Looks like the victim was targeted by suspect,” said Av Harris, a spokesperson for the Bridgeport Police. “She knows him.”

Police have had trouble piecing together what happened because the victim is unable to speak.

“Any communication we have with her right now is just from her writing on a pad for us,” he added.

“She’s like my sister,” said the victim’s friend Alexandra Molina. “I can’t believe this happened.”

The victim was well known in the city. “A lot of people know her here in Bridgeport, because she’s been living in Bridgeport for a long time,” Molina said. “I don’t see that she has a problem with anyone.”

“She’d help anyone. Anyone that needed help, she’s been there for anyone.”

Police say it’s too early to tell if this was a hate crime.

Anyone with information about the crime should call Bridgeport Police at 203-576-TIPS.