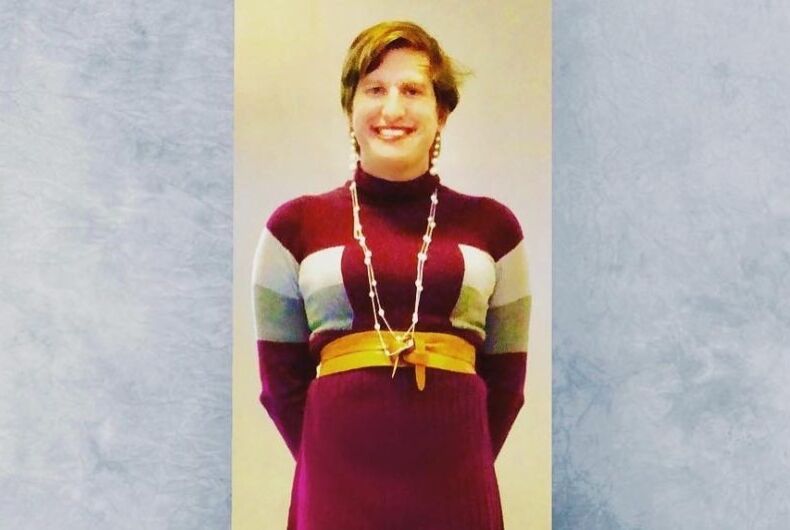 Charlotte Clymer, the rapid response press secretary for the Human Rights Campaign, is not to be messed with. A small group of evangelical street preachers found that out the hard way last weekend.

Clymer recounted her experience on Twitter, saying the group stopped her at a downtown cafe, motioned for her to remove her headphones and asked if they could pray for her.

“I asked them why they wanted to pray for me, and the same person answered that they felt called by God to walk around the streets of D.C. and let God’s voice tell them who might be broken or otherwise need prayer,” she tweeted. “She literally used the word ‘broken’.”

So she decided to give the would-be evangelists a taste of their own medicine.

“My introduction to Christianity was in evangelical churches,” Clymer wrote about her experience in the Washington Post. “For years, I navigated conservative religious spaces where I encountered bigotry and attempts to shame LGBTQ people and women as often as I found warmhearted people eager to serve others.”

“I have heard the statement ‘I’ll pray for you’ said with love, and I have heard it said full of judgment and scorn. I know the difference, and the folks who confronted me outside the cafe were making their judgment clear.

“Instead of a theological debate that usually goes nowhere for lack of good faith in discussion, I wanted them to feel what it’s like to have someone supposedly approach in love but inflict pain and discomfort. Perhaps that’s what it takes. A forced perspective in empathy. Why not try that approach?”

“I could have ignored them, but I’ve had it up to here with some evangelicals giving a bad name to their community by insisting on defining my humanity for me. They saw a transgender person and assumed I was broken because of my gender identity,” she writes.

“It angered me that the whole of my being could be reduced to their flawed understanding of LGBTQ people, a view that could easily be revised if only they would take the time to get to know me instead of assuming they already did.”

Check out the tweets below and try not to smile in satisfaction at Clymer’s approach.

I asked them why they wanted to pray for me, and the same person answered that they felt called by God to walk around the streets of D.C. and let God's voice tell them who might be broken or otherwise need prayer. She literally used the word "broken".

And I thought: let's do this. And I so asked their spokesperson if she understood how it might look to be searching for "broken" people to pray for and specifically pick out a random transgender person on the street to offer prayer. And they looked more than taken aback.

"You know how Matthew says that where two or three are gathered in Jesus' name, there He is with us." And they stare blankly at me because they have tiptoed with their condescending, passive-aggressive bullshit straight into a brick wall, and I have no intention of going easy.

And I specifically mention the natural beauty of the LGBTQ community and thank God again for making us as we exist, and I throw-in there a genuine wish that their trip back home is a safe one and wrap the prayer up in the usual Evangelical banal phraseology to let them know…

…that I know their community's vernacular better than they do, and by the time I am finished, by the time I have translated the score back to them by tenfold relative to their passive-aggressive "let us pray for you", they murmur their thank yous and scuttle thou hell away.

Evangelicals: you are not doing the Lord's work by dumping your misplaced condescension on random strangers you believe to be, uh, "broken".

These people did not want to know more about me. They wanted to talk at me and pray at me. And I'm fairly sure Jesus would not do that.