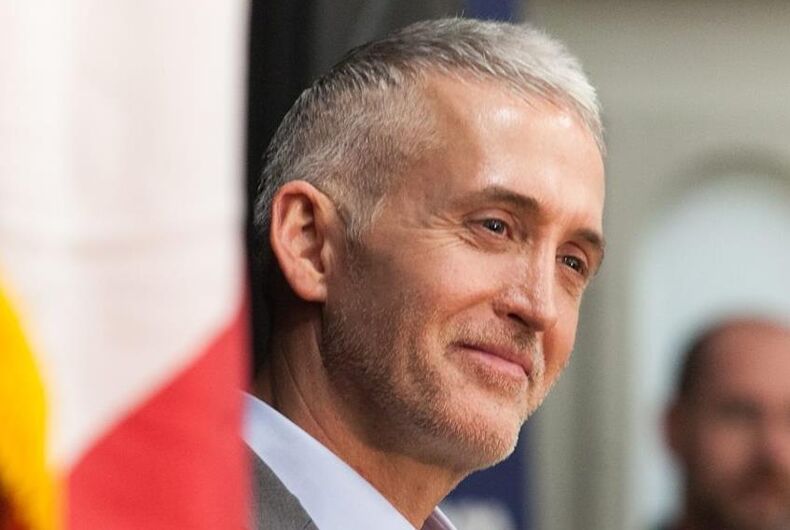 Rep. Trey Gowdy (R.-S.C.) won’t be running for re-election this year, apparently tired of the snake pit that is the House of Representatives. As chair of the House Oversight Committee, Gowdy has considerable clout, so his departure is clearly personal.

So why is he leaving? In an appearance on CNN, Gowdy said, “I haven’t been good, I don’t think, in Congress and I don’t enjoy it.”

If he’s looking for an argument, he won’t get one.

Gowdy is best known for conducting the endless round of hearings into the death of Ambassador Christopher Stevens in Benghazi (and his weird haircuts). The goal of those hearings was to pin something on former Secretary of State Hillary Clinton, even though all the evidence pointed to no wrongdoing.

After a total of six investigations, House Republicans finally had to admit that the deaths of Stevens and another State Department employee were simply a tragedy. But at least we got a lesson from Clinton in how to school idiots grilling you before Congress for 11 hours.

But while the Benghazi investigations may be the pinnacle of Gowdy’s political wrong-headedness, it’s not the only one. When it comes to LGBT issues, Gowdy has been consistently wrong too.

For example, there was the time that Gowdy decided the best way to attack marriage equality was to compare it to polygamy and incest during a Congressional hearing.

Or the time that he sponsored a bill that would allow Congress to sue President Obama for failure to enforce federal laws, like the ban on marriage equality, and then blasted Obama in a speech from the House floor that conservatives adored.

No wonder that Gowdy has a perfect zero score from the Human Rights Campaign.

Gowdy is now promoting a book that he co-wrote with Sen. Tim Scott about their “unlikely” friendship. Although the two are virtually identical politically, the unlikely part has to do with Scott growing up poor and black, while Gowdy grew up affluent and white.

Gowdy gets partial credit for his willingness occasionally to criticize the Trump administration when other Republicans remain silent. He’s been particularly vocal since announcing his retirement in January. Most famously, Gowdy told Trump that when it comes to the Russia investigation, if you’re innocent “act like it.”

But that doesn’t undo the damage that Gowdy has done. It’s easy to be critical when you’ve got nothing to lose. The time to stand up passed a long time ago. And on that count too, Gowdy did a bad job.

The 5 most dangerous religious right leaders in Trump’s America

Roseanne finally breaks with Trump… over her ratings