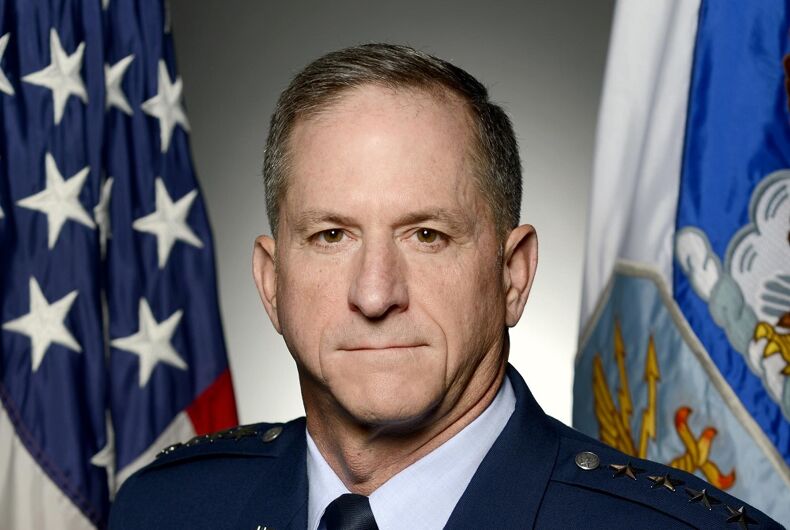 The Air Force Chief of Staff said that he was not aware of any negative effects of transgender people serving in the military, joining the other three chiefs of staff.

He was questioned by Senator Kirsten Gillibrand, who said, “In the last two weeks General Milley, General Neller, and Admiral Richardson have told me that they have seen zero reports of issues of cohesion, discipline, morale as a result of open transgender service in their respective service branches,” referring to the chiefs of the Army, Marine Corps, and Navy.

She then asked him if he knew of any reports of such issues. Goldfein said he was not. He said that he talked to a few transgender service members and was impressed by the “commitment to serve by each of them.”

Last week, Army Chief of Staff Mark Milley testified that he had heard of “precisely zero reports” of problems with transgender soldiers. Marine Commandant General Robert Neller said he was “not aware of any issues in those areas.” Chief of Naval Operations Admiral John Richardson said “it’s steady as she goes” regarding transgender people in the Navy.

The statements bolster the lawsuits against Donald Trump’s transgender military ban. Discrimination is only legal if the government has a good reason; the service chiefs are proving the government doesn’t.

Federal judges in these cases have already found that the ban is a form of sex discrimination, and one federal judge went so far as to say that transgender people are a “protected class.” This raises the burden of proof for the government: it has to show that the transgender military ban serves a real policy purpose and that it’s the best way to achieve that purpose.

Since Trump tweeted the transgender military ban last July, judges have had trouble even seeing what its policy goal is, much less find that goal important enough to justify discrimination. This is why politicians hold hearings and commission reports before passing laws, even if their minds are already made up: they want to show the world – and the courts – what problem the law is supposed to fix and how it’ll fix it.

Insiders said that the report was actually written by Mike Pence and activists from anti-LGBTQ organizations, and a federal judge said that the two transgender bans are the same thing, so the decision-making process behind both of them is whatever occurred before Trump tweeted last year.

When he tweeted last year, Trump said that he had talked to “my Generals and military experts” about the ban, but in court the White House’s lawyers couldn’t name any of those generals or experts.

Now all four military service chiefs have said they don’t see a problem with transgender people in the military, which undermines the report that was supposedly produced by the Defense Department. This only helps LGBTQ advocates in court argue that there’s no reason to keep transgender people out.

Here’s what actually drives Trump supporters. It may shock you.