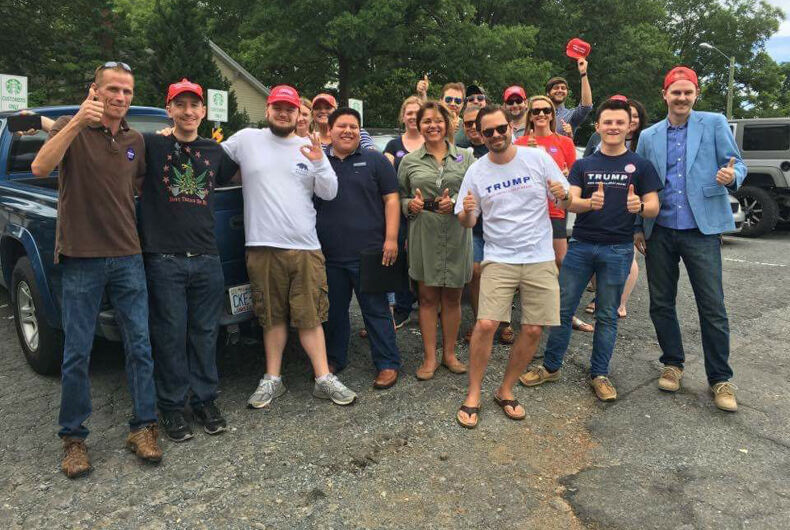 Brian Talbert, far left, and others at a Starbucks sit-in event protesting the treatment of a Trump supporter by staff.Photo: Brian Talbert, Courtesy Photo

It turns out Donald Trump’s angry white male supporters are angry that being white and male doesn’t come with as many privileges as it used to.

From the moment he stepped on the escalator at Trump Tower, pundits and analysts have been trying to understand what drove Donald Trump’s unlikely political rise. Many tied his electoral victory and his broad support among white Christian men to the economic anxiety those voters felt due to rising unemployment and exclusion from economic recovery.

A new study published in the Proceedings of the National Academy of Sciences says that white, Christian, male voters turned to Trump because they feared their status was at risk.

“It’s not a threat to their own economic well-being,” said Diana C. Mutz, the author of the study and a political science and communications professor at the University of Pennsylvania, “It’s a threat to their group’s dominance in our country over all.”

The study further confirms what other studies suggested even before Donald Trump’s candidacy; that behind white conservatives’ support for the Republican party is driven by a loss of primacy. Hit by a one-two punch of economic adversity and demographic trends indicating that whites are becoming a minority, white conservatives — particularly men — fear losing their position as the nation’s preeminent demographic.

These are the voters who eagerly bought into Trump-style birtherism, which portrayed Barack Obama as alien and other. His electoral victories, driven by a multi-racial coalition that twice propelled him to the White House without winning a majority of white votes, symbolized their decline and the loss of what they see as their rightful place at the center of American politics and identity.

Trump’s white, Christian, male, heterosexual supporters view progress as a zero-sum game. Gains and advances by African-Americans, Latinos, women and LGBTQ people mean that there is even less for them.

While many of us hope it turns out to be the last gasp of the political and demographic hegemony behind structural racism, sexism, and homophobia, to Trump’s supporters his victory represents a kind of restoration of supremacy, a return to the previously established order. It’s no coincidence that Trump’s administration is so white and male.

What no study can tell us is what happens when that hoped for restoration is hollowed by continuing demographic trends.

What happens when the GOP runs out of white voters who respond to dog whistles and coded rhetoric?

What happens to the fear and the anger that got us here in the first place?