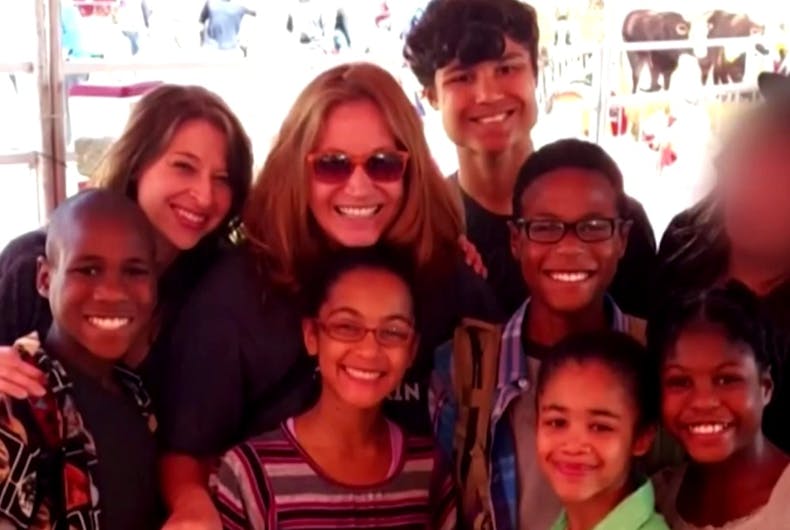 Police in Mendocino County now say that two lesbian mothers from Washington state appear to have intentionally driven their SUV off a cliff, killing themselves and their six children, ages 12 to 19.

Sarah and Jennifer Hart’s 2003 GMC Yukon XL was found last Monday in the Pacific Ocean. The moms and three of their children were found inside, while the other three children are missing and presumed to have died in the crash.

Related: Lesbian moms & their 6 kids presumed dead after their car plunges over cliff

The car went over the edge of Highway 1 and fell 100 feet into a rocky part of the ocean. At first, police found no evidence that showed that it was anything but an accident, but new evidence has led them to consider the possibility of murder/suicide.

Police were initially confused because there were no skidmarks or other signs that the car tried to stop before falling off the cliff. The cliff is also 70 feet away from the highway, leaving investigators to wonder why the driver didn’t notice that she wasn’t on the road.

Cal Robertson, a spokesperson for the California Highway Patrol (CHP), said that the car’s computer has been examined, and it showed that the car stopped just before it went over the edge, and then accelerated until it went over.

“Pure acceleration all the way,” he said. The CHP said that the car continued to accelerate even after it went off the edge.

Investigators also noted that the car went straight off the cliff, not at an angle, which catapulted it over embankments.

“There is no evidence it went (off) at an angle. It appears it went straight off,” CHP’s Greg Baarts said.

Baarts also confirmed early reports that the SUV’s speedometer was pinned to 90 miles per hour, but said that it might have changed on impact and stressed that that’s an unreliable way to determine a car’s speed at the time of a crash.

Mendocino County officer Greg van Patten said that aerial searches for the three other children’s bodies are continuing and have been extended into nearby Sonoma County. Only three of the six children were found in the car, but since they didn’t have seatbelts on police believe that the other children fell out.

Van Patten said that the “murkiness” of the water and the ocean currents are making the investigation difficult.

“The location where the crash occurred is very difficult to search. Tides are strong and unpredictable,” he said. “We can’t even get divers in the water.”

No suicide note has been found, and police said that the family’s animals were left unattended at their home.

Autopsies and toxicology analyses have been conducted and the results will be known in a month, Van Patten said.

Neighbors say that the Harts’ car disappeared from their driveway the previous Saturday, a day after Clark County Child Protective Services opened an investigation into them for possible neglect and abuse.

CPS tried to contact the parents several times, including visiting their home the Friday before they left, but weren’t successful.

Bruce and Dana DeKalb, who live near the Harts, said that one of the daughters showed up at their door last year saying that she needed to be protected from her moms.

“She said that they were abusing her,” Bruce said.

The moms offered them what sounded like a reasonable explanation and the DeKalbs accepted it.

But the DeKalbs said that several weeks ago Devonte Hart, 15, showed up at their door saying that his moms were “punishing them by withholding food.” They gave him food for a few days and then called child services.

“We knew there was something weird, because they never go anywhere,” Dana said.

While the child services agency in Washington said that it had no prior dealings with the family, Sarah Hart had been arrested in 2011 when the family lived in Minnesota and ended up pleading guilty to domestic assault. One of her daughters had showed up at school with bruises.

Sarah and Jennifer were both white, and all six of the children they adopted were black. Their friends say they were loving parents who proactively exposed their children to social justice activism.

In 2014, an image of then-12-year-old Devonte hugging a white police officer at a demonstration went viral. The family was participating in a protest against a grand jury that failed to indict a police officer who shot an unarmed black teenager in Ferguson, Missouri.

The family moved from a suburb of Portland, Oregon, to their home in rural southwest Washington following the media attention and death threats that came after the picture went viral.

In 2016, the family was called on stage at a Bernie Sanders rally in Vancouver, Washington.

“They were really radiant, warm, adventurous inspiring people. They were always on some grand adventure, and the kids were living this life that was kind of like this dream,” family friend Zippy Lomax said.